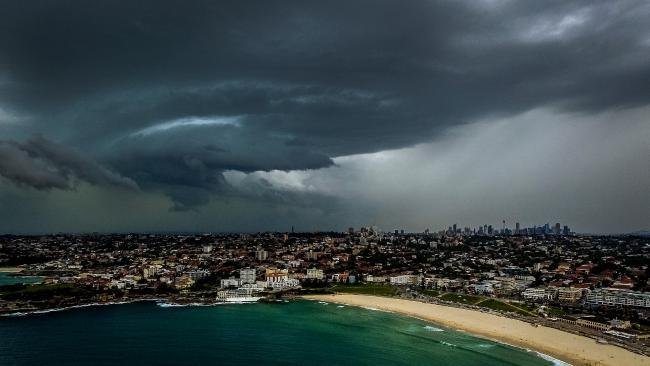 AROUND Australia, residents are bracing for heavy rain and possible flash flooding just two weeks after devastating storms claimed the lives of five people and caused extensive damage.
Warnings have been issued for New South Wales and Queensland, with another east coast low pressure system predicted to hit this weekend. The low will move southward into the southern Tasman Sea on Monday, putting Victorian residents on alert too.
The Northern Territory is also set to receive widespread rain and storms as an upper trough amplifies over Central Australia.
Here’s what you need to know.
NEW SOUTH WALES
The Bureau of Meteorology has issued a flash flooding warning for nine rivers and catchments in NSW as a low pressure system moves over the state, bringing widespread rain to eastern regions.
Boat operators and fishers have been warned of dangerous surf from late tomorrow, two weeks after storms whipped up seas causing massive coastal erosion.
But the BOM’s acting NSW regional director Jane Golding said this weekend’s low pressure system was expected to create different conditions to the last.
“Overall the higher rainfall totals are not expected to be as large or as widespread as the event we had in early June,” Ms Golding said. “However given the wet condition of the catchments in these areas there is a risk of riverine and flash flooding.”

Sydney’s Northern Beaches Council is scrambling to get sandbags and boulders to a dozen beachfront Collaroy homes which are teetering precariously on eroded coastline. The residents remain in temporary accommodation but have been allowed to return to their homes to collect belongings.
More than 300 flood rescues were carried out by NSW state emergency volunteers during the last deluge.

A rain band stretching from Townsville to the NSW border is passing over drought-ravaged inland Queensland and is expected to reach the coast by tomorrow night, causing flash flooding and thunderstorms.

Localised isolated falls in excess of 100mm are likely in the Wide Bay region, while winds of up to 90km/h are forecast, strong enough to bring down tree branches.

Bureau of Meteorology forecaster Adam Blazak said the downpour would be similar to one that drenched southeast Queensland a fortnight ago.

Victoria could see rainfalls of 15-30mm in the North East tomorrow and Monday due to the low pressure trough.

If the rainfall is in the upper range of the forecast then areas of minor flooding may develop particularly in the Kiewa and Upper Murray catchments during Monday. The Bureau of Meteorology is continuing to monitor the situation and will issue catchment specific warnings if and when required.

Severe thunderstorms with peak gusts around 90km/h and rain which may lead to flash flooding are forecast for parts of the Barkly and Simpson forecast districts.

WARNING FROM THE SES

The SES advises that all community members should:

• Stay away from waterways and stormwater drains during and after heavy rain.

• Be aware that in fire affected areas, rainfall run-off into waterways may contain debris such as ash, soil, trees and rocks, and heavy rainfall increases the potential for landslides and debris across roads.

Centre director of the BoM’s National Operations Centre Andrew Tupper said earlier this week east coast lows were not uncommon for this time of year.

“On average, the eastern seaboard sees seven significant east coast lows each year, and most occur between June and August. These systems are major rain producing events for the east coast of Australia.”

There were more than 30,000 insurance claims worth a combined $235 million across east coast states and Tasmania in the aftermath of the storms earlier this month.