Wealth creation is about value creation 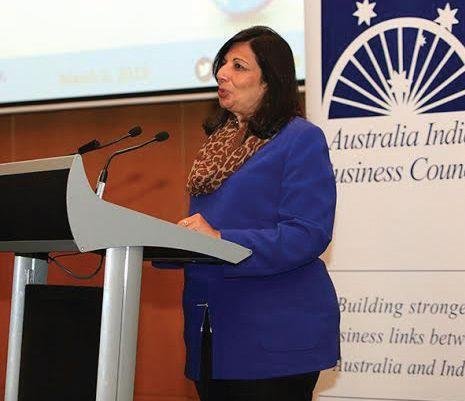 Confessions of an Accidental Entrepreneur” is how Dr. Kiran Mazumdar Shaw described her presentation at the dinner meet organised by the Australia India Business Council (AIBC) on March 6 at the Four Seasons Hotel in Sydney. Dr Mazumdar-Shaw is Chairman and Managing Director of the most successful and globally known company BIOCON Limited, and is rated in the Forbes list as one of the 100 most powerful women in the world.

A highly successful technocrat of global standing, Dr Mazumdar Shaw is the founder of India’s leading biopharmaceutical
enterprise BIOCON, which she built with a modest Rs 10,000, from a garage start-up into a maker of drugs for diseases such
as cancer and diabetes into a multimillion dollar business. She has the distinction of being named among TIME magazine’s ‘100 Most Influential People in the World’. Dr Mazumdar-Shaw has also featured in Fierce Biotech’s list of the ‘World’s 25 Most Influential People in Bio pharma’, and she is a part of the Prime Minister’s Council on Trade and Industry in India. and the US-India CEO Forum.

In her hour-long presentation, Dr Mazumdar-Shaw recounted her experiences on returning to India after an education in Australia at the Federation University in 1974. She was shocked to find a gender bias in the brewing industry in general, and that is what made her decide on starting a bio-tech business with a modest capital.

While her business was considered as ‘risky’ by financial institutions in those days, Dr Mazumdar Shaw’s strong partnerships with an Irish bio-technological firm and UNILEVER, a globally known health care products company were the start of her success story. She described the journey of different business models from bio- enzyme to bio-pharma, innovation, research and globalisation, each leading to the next progressive level. Dr Mazumdar-Shaw also provided an overview the fastgrowing contract research arm of BIOCON –Syngene, a leader in India and second best in Asia.

Today BIOCON is worth over a billion dollars with pioneering, strategic business development and a global vision, and the enterprising Dr Mazumdar-Shaw is also aiming to secure significant market in research services worth $50 billion. “Wealth creation is about value creation,” she emphasised often, while recounting her success story.

Dr Mazumdar-Shaw also spoke about the opportunities in biotechnology in the Australia India space. Traditionally both countries have been looking at different partners like the US, China or European countries. “We are not looking at each other,” said Dr Mazumdar-Shaw adding, “there is an opportunity for Australia’s innovative skills and India’s development skills to come together. The AIBC can play a major role in facilitating such opportunities.”

Dr Mazumdar-Shaw also announced two scholarships at the Ballarat University towards bio-tech research. Dr Mazumdar Shaw is clearly a role model for the global youth and an inspiration to the community.

It is hoped that with such a positive vision from a global leader of Dr Mazumdar-Shaw’s standing and facilitated by AIBC, Australia India trade and business collaborations grow from strength to strength in the coming years.