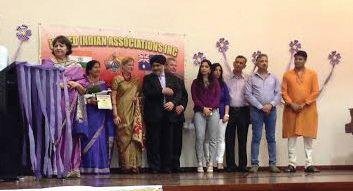 “The story of women’s struggle for equality belongs to no single feminist nor to any one organization but to the collective efforts of all who care about human rights” Gloria Steinem The United India Association held a special celebration on March 7 to commemorate International Women’s Day at the Auburn Town Hall, which was well-attended by over 200 guests and special invitees.

Varsha Tembe from the UIA Women Committee began the evening by welcoming guests and Sumati Advani, Chair of the UIA Women Committee presented an overview of the celebrations and the issues to be discussed. John Kennedy, UIA’s President outlined the activities of the UIA Womens Group that effectively address key issues affecting our community. UIA is empanelled by the Government of India to provide support and assistance to affected women from the community in NSW.

A significant and particularly relevant aspect of the event was the Women’s Forum’ which openly addressed key issues affecting women in the community, such as domestic violence, gender inequality, disability-related and support services to affected families, among other topics. The forum was an excellent opportunity to impart information and garner support through dialogue and discussion, especially in relevance to the celebration of IWD.

‘SAMARPAN’, the first organisation of its kind to focus on people with disability (PWD) in the Indian/ sub- Asian community and with a focus on supporting PWD and their families, offered an introduction and stated the objectives of their organisation through a presentation. Michelle Rowland, Federal Member of Parliament highlighted the issues of women in the community and advised that, “We must continue to assist the needy at every opportunity”. Garry Merryweather, Superintendent, Blacktown Command, NSW Police and a White Ribbon Ambassador, recounted instances where his team had to deal with victims of domestic violence from the community, and complimented the UIA on their efforts to provide support and to these unfortunate victims.

Arvind Ranga, Consul (Consular) stated that there were a number of women from the community who have been victims of domestic violence or similar issues, and the Government of India is providing necessary support and assistance by working closely with community organisations like the UIA. Mr Ranga appreciated the efforts of the UIA across a number of instances in 2014. Rugmani Venkatraman, a wellknown community worker dealing with domestic violence situations since many years, recounted her experiences and the acceptance issues within the community, in handling this chronic topic. She also elaborated on the activities of the Boronia Multicultural Services to provide support for the Indian subcontinent community.

Dr Harinath, Chair of Multicultural NSW, Community Relations Commission, spoke on the NSW Government’s commitment to supporting women in need, and complimented Dr Minoti Apte OAM on her recent award of ‘Woman of the Year’, and for being one of the true role models in the community. Speaking on the occasion, Dr Apte called upon youngsters in the community to be role models in their respective fields and seek guidance from high achievers to emulate their success.

The highlight of the event was the awards ceremony, at which Dr Apte and many other women achievers from the community were felicitated. The four hour long event also had segments of light entertainment, raffles and music. International Women’s Day (IWD) is recognised by the United Nations, and was originally called International Working Women’s Day. It is celebrated annually on March 8, as an event of respect, recognition and appreciation for all women and their contribution to economic, political and social achievements. Many countries celebrate the day by wearing purple ribbons.