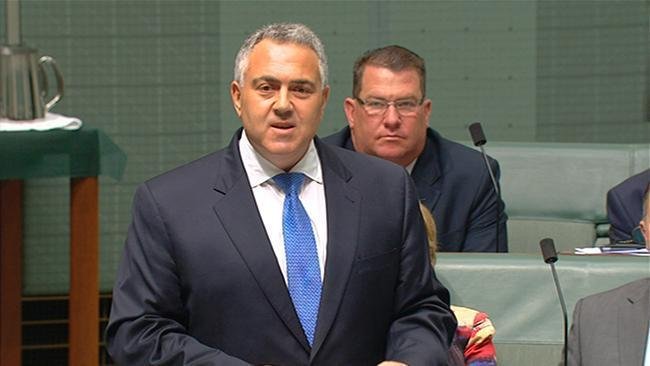 FORMER treasurer Joe Hockey has bowed out of federal Parliament, using his final speech to call for the political revolving door to be “jammed shut”.

The outgoing MP for North Sydney was critical of the “rapid and unpredictable changes in government” on both sides of politics since the stable Howard era, which essentially saw him booted from the position of treasurer when Tony Abbott was overthrown as prime minister. The leadership change and loss of his job ultimately led to Mr Hockey’s resignation today.

“We cannot make it normal to have four prime minister and four treasurers in just four years,” he told parliament in an emotional and at times revealing speech.

“Leadership instability and ministerial turnover is the enemy of good public policy.”

“Our jobs have become much more challenging over the years with the advent of a ‘need it now’ culture,” he said.

Mr Hockey, whose seat is likely to be handed over at a by-election before Christmas, defended his legacy, listed his achievements, and shared anecdotes from his almost two decades in Canberra.

While he said the medical research Future Fund was his “single proudest achievement”, he claimed his famous End of the Age of Entitlement speech was the most influential political speech in the last 20 years.

Mr Hockey paid tribute to former prime minister Abbott, who was not present for the speech, describing him as one of the “most selfless, hardworking and honourable people I have ever met”.

“I say directly to the Australian people that the real Tony Abbott is more of a good and decent man than you may know,” he said.

Mr Hockey insisted the Abbott government was good at policy but struggled with politics.

The former treasurer, who has been very vocal in expressing his loyalty to former leader Tony Abbott, also used his final speech to say what he really thought about some of the government’s failed policies.

He called for co-payments in health, greater cost recovery in education and universal means testing in welfare, as well as the need for tax reform he failed to achieve as treasurer.

“Our taxation system needs reform for the 21st century economy,” he said.

“Integrity is hugely important but the best way to get compliance is to have lower, simpler taxes. We abolished seven taxes and fixed 96 tax problems but reform had to go further and through a comprehensive review of the tax system.

“I endeavoured, and failed, to keep all options on the table.”

Continuing on policy, Mr Hockey said the GST should be increased and broadened over time, negative gearing adjusted to be skewed towards new housing, and called the current structure of penalty rates “profit murder” for businesses.

Thanking his electorate, colleagues, staff and family, Mr Hockey said he was proud of his achievements in parliament, and rounded out his speech with a piece of advice to both the parliament and his children.

“it is far better to dream might things, to eek glorious triumphs even though checkered by failure, than to be among those poor souls who neither suffer much, nor enjoy much because they live in the great twilight that knows neither victory nor defeat,” he said.

Mr Hockey concluded his speech to a standing ovations before Mr Turnbull declared his party’s admiration for the former treasurer, saying “we love you”.

“You’ve executed every office you’ve had … with great passion, with imagination,” the Prime Minister said.

He thanked the “sunny optimist” for his service and praised his frankness, honesty, and courage to reveal exactly what he through, especially to his leaders.

Opposition leader Bill Shorten said many of his Labor colleagues had good words to say about Mr Hockey, but couldn’t resist opening his reply to the former treasurer’s words with a zinger.

While Mr Hockey prepares to leave federal politics he won’t turn his back on public life, expected to take up a diplomatic posting in Washington.