Vijender on a roll, sixth straight win for star boxer in pro fight 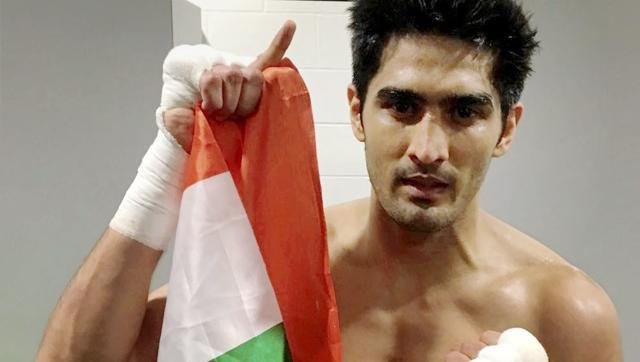 Fighting the first eight-round contest of his fledgling pro career, Vijender completed another dominating win barely a minute into the third round in a Super Middleweight contest at the Macron Stadium.

The 30-year-old Indian will next be seen in action on home turf in Delhi where he will fight for the World Boxing Organisation’s (WBO) Asia title belt against a yet-to-be-finalised opponent.

“When I entered the ring, the coach told me to be patient and he came to me and I could play my game. Every fight is important for me and I don’t think there is any relaxation. By winning first eight round fight, my confidence level has really gone up and this is a step forward heading towards the title fight,” Vijender, the London Olympics bronze medallist, said after the bout.

Soldra, who had tasted defeat only thrice in 16 bouts before Friday’s loss and had promised a horror show for Vijender, was in for a thrashing as the Indian overpowered him in a clinical fashion.

“I am thrilled to get my sixth professional victory and excited for my homecoming title fight. Soldra was a good opponent but my punches replied to him. I think this fight was a horror show for him. I am happy that before my title fight, I am able to have six knockout wins,” Vijender said.

The experience of 81 rounds, which Soldra brought into the bout, hardly made a difference to the strapping six-footer from Haryana, who went about dismantling the Polish with consummate ease.

Walking into the ring to famous Bollywood song “Singhh is King”, Vijender was off to an explosive start, dominating the first round. In fact, he sent Soldra crashing on the mat in the first round. Soldra hung in there for some more thrashing before his resistance fell apart in the third round.

Vijender’s powerful right hand did all the damage as Soldra struggled to even stand on his feet in the third round.

Soldra tried to keep a tight guard to avoid the assault but that was hardly going to be enough given the sheer power of Vijender’s jabs and uppercuts.

The referee came to Soldra’s rescue when Vijender was quite literally toying with him on the ropes and the contest was stopped midway into the third round.

“He has got a lot of power and his technique is good and that is brilliant,” said Vijender’s trainer, Lee Beard.