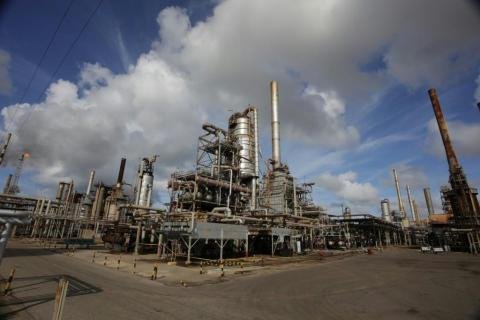 Venezuela’s vital oil industry is failing and the socialist government is feeling the pressure, and now the regime of President Nicolas Maduro is being accused of lashing out at the sector’s unions.

Venezuela is in the midst of a crippling economic crisis that it is unable to escape because its oil industry is operating at just one eighth of its capacity from 12 years ago.

Critics say the government doesn’t want anyone to know it’s to blame for the demise.

The government of Venezuela President Nicolas Maduro claimed in October, 2020 that the Amuay oil refinery was subjected to a terrorist attack
Venezuelan Vicepresidency / Handout

“The idea is to neutralize the oil union movement by force,” said Ivan Freites, director of the federation of Venezuelan oil workers, who has fled to neighboring Colombia.

Speaking to AFP by WhatsApp, the 57-year-old accused the government of “political persecution.”

He slipped out of Venezuela secretly, using a false identity and by breaking through border fences put up due to the coronavirus pandemic.

“They were going to come for me,” Freites said.

Four days before that, Guillermo Zarraga — a colleague of Freites’s at the Paraguana refinery, the largest in Venezuela — was detained after an explosion at the refinery that the government claimed was a “terrorist attack.”

Union leaders, however, said it was due to failed attempts to reactivate facilities amidst a chronic fuel shortage that has seen cars lining up for days at gas stations waiting to fill their tanks.

In January, two other union members were arrested by members of the National Guard during a workers’ assembly at the major El Palito refinery in the northern Carabobo state.


“In Venezuela the criminalization of critical opinion and social protests is a state policy, systematic and generalized,” said the human rights NGO PROVEA in a 2019 report on the persecution of unions.

Venezuela has been wracked by three years of hyperinflation and has been in recession for seven years.

Citizens have faced shortages of basic necessities such as food and medicine while public services regularly fail.


It is almost entirely dependent on its oil revenue but according to the Organization of the Petroleum Exporting Countries (OPEC) it is producing just 400,000 barrels a day compared to 3.2 million in 2008.

Maduro’s government blames Venezuela’s problems on US sanctions — particularly those targeting state oil company PDVSA — but analysts say the South American country’s issues run deeper and are the fault of corruption and mismanagement.

PDVA employees once enjoyed salaries that were the envy of other sectors but inflation and currency depreciation mean they fluctuate from $3-$10 a month.

The collective agreement that protected workers’ rights and conditions ran out in October 2019 and has not been renewed, said Jose Bodas, general secretary of the oil union workers’ federation.

He said some workers had been forced to resign or retire.

Venezuela is using the law to “restrict the possibility of holding rallies, demonstrations or strikes,” according to PROVEA, which accuses the government of being “anti-democratic.”

“Any act of protest by the citizenry is considered a ‘destabilizing action’.”

All unions have come under fire but recently the government appears to have focused on the oil industry.

“Us oil (unions) are the most under attack because of what oil signifies …. their power base is there and they’re not going to let the workers rise up,” said Freites.

Until the industry collapsed, PDVSA brought in more than 90 percent of Venezuela’s revenue.

Maduro’s regime has its defenders, though, including the oil workers’ federation president Wills Rangel.

He’s a party loyalist and was elected as a legislator in December 6 parliamentary elections that were boycotted by the main opposition parties and denounced as neither free nor fair by the United States, European Union and several Latin American countries.

When asked about the arrest of two unionists accused of being CIA spies, Maduro told a foreign press conference that there were “full guarantees” for unions in Venezuela.

“It’s a legal issue … I’m not going to get involved,” said Maduro, who insisted he was a “workers’ president” due to his past as a Caracas metro industry unionist.