EU Starts To Ease Bans Over UK Virus Strain; WHO To Meet 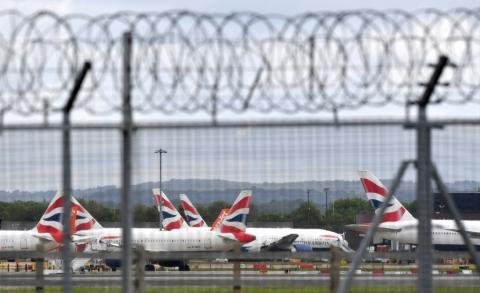 Europe on Wednesday began lifting travel bans on Britain put in place to contain a new fast-spreading Covid strain while WHO experts were set to meet on a response to it.

Meanwhile, in the United States, President Donald Trump rejected a massive Covid economic relief package passed by Congress, branding it “a disgrace” as millions of Americans are suffering fallout from the pandemic.

There was however positive news in Australia, where Sydney eased lockdown restrictions for Christmas after the country’s largest city reported a second day of new cases in the single digits.


The new coronavirus variant has swept the UK and spurred global panic just as vaccines are being rolled out.

But the European Commission on Tuesday urged EU nations to lift travel bans imposed on Britain in recent days.


The European Union instead urged virus tests be carried out on passengers within 72 hours before travel.

“Flight and train bans should be discontinued given the need to ensure essential travel and avoid supply chain disruptions,” the EU said.

France was reopening cross-border travel with Britain Wednesday but a negative Covid-19 test will be required.


The ban on arrivals in France has led to long tailbacks of freight lorries in southern England and has disrupted passenger travel in the run-up to Christmas.

The Netherlands also said it was lifting its ban beginning Wednesday but noted that all passengers, including EU citizens, must have a recent negative test to enter.

The World Health Organization in Europe said its experts would meet on Wednesday to discuss how to handle the outbreak, saying “limiting travel to contain spread is prudent until we have better info”.


The death toll from the virus surpassed 1.7 million on Tuesday, roughly a year after it emerged in China.

Germany on Tuesday extended its ban on arrivals from the UK — as well as South Africa, where a similar variant has been found — until January 6.


Health Minister Jens Spahn said that “as long as it is possible”, Germany aims to prevent “potentially dangerous virus mutations from spreading in continental Europe”.

The European Union is preparing its rollout of the Pfizer-BioNTech vaccine on Sunday, following similar vaccination campaigns in the UK and the US.

Mexico said it would start its Covid vaccinations on Thursday.

The co-founder of BioNTech said on Tuesday it was “highly likely” that its vaccine would work against the mutated strain detected in Britain.

In the US, the world’s worst-affected country, top infectious disease specialist Anthony Fauci received his Covid-19 vaccine as officials continued to seek to build confidence among the public.

But Trump’s rejection of the $900 billion Covid relief package passed overwhelmingly by Congress led to concern, though lawmakers can override his veto if he goes through with it.

Britain has become increasingly isolated, and one of the biggest concerns was France’s ban on freight traffic as part of a 48-hour blockade on the movement of people across the English Channel.

Late Tuesday, UK Transport Secretary Grant Shapps announced Britain and France had settled on a protocol that “will see the French border reopen to those travelling for urgent reasons, provided they have a certified negative COVID test.”

Despite the breakthrough in talks, congestion around the key southern port of Dover remains unlikely to recede in the short term.

The major British transit hub said it would reopen from midnight local time (2300 GMT) for travellers with a negative result.

While Prime Minister Boris Johnson insisted that supply chains were “strong and robust”, experts warned that Britain may face shortages of certain fresh foods over Christmas if crossings to France were not reopened Wednesday.

The 84-year-old pope, known for his love of getting close to the faithful, has been reluctant to wear a mask despite the pandemic that has hit Italy hard.