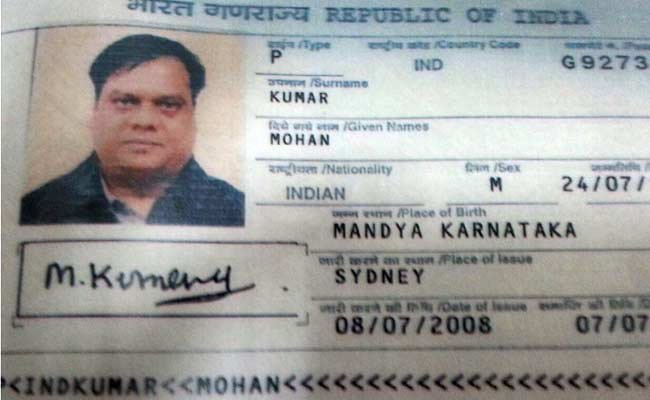 Mob boss Rajendra Sadashiv Nikalje alias Chhota Rajan was arrested in the popular resort of Bali after being on the run for decades and Indonesian officials said the fugitive would be deported to India this week.

“It is official. We have captured Chhota Rajan. The identification process is on,” Singh told reporters after confusion persisted regarding the arrest for several hours.

Singh’s remarks came after Central Bureau of Investigation director Anil Sinha said Rajan was held after the agency made a request through Interpol.

Rajan, who was on Interpol’s most wanted list for two decades, was arrested on Sunday when he arrived at Bali’s airport from Sydney. The arrest was based on a red corner notice from Interpol and a tip from Australian authorities in Canberra, said Bali police spokesman Heri Wiyanto.

Police are questioning Rajan at the Bali police headquarter in Denpasar, the provincial capital, and coordinating with Indian diplomats for his deportation. “We will deport him this week,” Wiyanto said.

Rajan held an Indian passport when he arrived in Denpasar, 968 km east of the Indonesian capital Jakarta. Wiyanto said Nikalje had told police he had been hiding in Australia for seven years and flew to Bali by a Garuda Indonesia flight for a vacation.

Confusion prevailed after news of the arrest broke on Monday afternoon because another Indonesian official, Denpasar Police chief detective Reinhard Habonaran Nainggolan, told the media that the man’s name was Mohan Kumar alias Cyanide Mohan, a serial killer who preyed on women looking for marriage and was sentenced to death in 2013.

Wiyanto said the previous report about Kumar was wrong. Officials in Karnataka too confirmed Mohan had been in prison since his arrest in October 2009 and that he was currently being held in Belgaum Central Jail.

Chhota Rajan, 55, has been on the run for two decades and Interpol had flagged him as a wanted man in 1995.

“We received information from police in Canberra yesterday (Sunday) about the red notice for a murderer,” Wiyanto said. “We arrested the man at the airport yesterday. What we know is that this man was suspected to have carried out 15 to 20 murders in India.”

A spokesperson for Australian Federal Police said Interpol in Canberra had alerted Indonesian authorities, “who apprehended Nikalje at the request of Indian authorities”.

The federal police confirmed last month that Rajan was living in Australia under another identity and had been in discussions with Indian authorities, the spokesperson said but did not provide details.

Interpol’s website states Rajan was born in Mumbai on December 5, 1959 and is wanted for multiple charges, including murder, possession and use of illegal firearms, conspiracy and organised crime.

Rajan began his career in crime as a petty thief and bootlegger under the wings of Rajan Nair, who was known as ‘Bada Rajan’. He became the head of Nair’s gang after the latter’s murder.

Before he fled to Dubai in 1988, Chhota Rajan began working with mob boss Dawood Ibrahim. The two fell out after Ibrahim masterminded a string of bomb blasts in Mumbai in 1993 that killed 257 people and injured hundreds more.