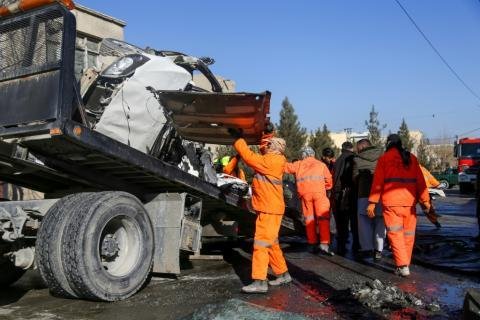 Two women doctors working at an Afghan prison with hundreds of Taliban inmates were among five people killed Tuesday in a bomb attack, officials said, in the latest of several targeted killings in Kabul.

Deadly violence has rocked Kabul and several provinces across the country in recent months, despite the Taliban and the government engaging in peace talks.

Tuesday’s blast happened in the south of the capital as the doctors were on their way to Pul-e-Charkhi prison when a bomb attached to their car exploded, Kabul police spokesman Ferdaws Faramarz said.

Two women doctors and two prison employees in the car — as well as a pedestrian — were killed, while a third woman doctor was wounded, Afghanistan’s prison authority said.

Faramarz had earlier told reporters that four prison doctors had been killed by the bomb.

Hundreds of Taliban fighters and other criminals are incarcerated at Pul-e-Charkhi, on the eastern outskirts of Kabul.

“The terrorist groups including the Taliban who have faced defeat on the battlefields are targeting civilians in the cities, highways and public facilities,” President Ashraf Ghani said in a statement.

“This is a sign of their desperation and defeat.”

Ross Wilson, the top US envoy in Kabul, also condemned the attack.

“It is shocking to learn of the deaths of Office of Prison Authority doctors, who work tirelessly each day to save vulnerable lives, especially during a pandemic when frontline medical personnel are desperately needed,” he said on Twitter.

No group claimed the attack but the Taliban denied involvement.

Municipal workers clean up debris from the site of a bomb attack in Kabul that killed five people, including two women prison doctors
AFP / Zakeria HASHIMI


Violence across Afghanistan has surged in recent months, including in Kabul where targeted killings of prominent figures, including journalists, politicians and rights activists have become more common.

The jihadist Islamic State group has claimed responsibility for some of the recent attacks in the capital, which have killed dozens of people.

Lawmaker Khan Mohammad Wardak was wounded in that blast.

Days before that incident, deputy Kabul province governor Mahbobullah Mohebi was killed in a similar attack.

On Monday, an Afghan journalist was shot dead by gunmen in the eastern city of Ghazni in what appeared to be another targeted killing.

Rahmatullah Nekzad had contributed to the Associated Press news agency since 2007 and also previously worked with the Al-Jazeera network.