Trump Warns Iran Over Rocket Strike On Embassy In Iraq 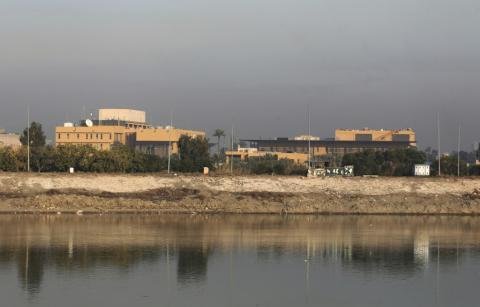 US President Donald Trump warned Wednesday he would hold “Iran responsible” in the event of a fatal attack on Americans in Iraq, as the first anniversary of the killing of a top Iranian general in a US air strike approaches.

“Our embassy in Baghdad got hit Sunday by several rockets,” Trump said on Twitter, referring to an attack that caused damage but no deaths.

“Guess where they came from: IRAN,” he added.

“Now we hear chatter of additional attacks against Americans in Iraq,” he added, before offering “some friendly health advice to Iran: if one American is killed, I will hold Iran responsible. Think it over,” he said.

Secretary of State Mike Pompeo had already pointed the finger at Tehran, while the US military command that covers the region said that the rocket attack “was almost certainly conducted by an Iranian-backed rogue militia group.”

It said in a statement that while it “caused no US injuries or casualties, the attack did damage buildings in the US embassy compound, and was clearly NOT intended to avoid casualties.”

The US embassy in Iraq on January 3, 2020, the day Iranian General Qasem Soleimani was killed in a US drone strike in Baghdad. A volley of rockets exploded near the embassy on December 20, 2020, as tensions mount ahead of the anniversary of the killing
AFP / AHMAD AL-RUBAYE


“The United States will hold Iran accountable for the deaths of any Americans that result from the work of these Iranian-backed rogue militia groups,” it added.

Iran responded by calling on US authorities on Monday not to provoke “tensions”.

Trump ordered the drone attack on January 3, 2020 to kill the powerful Iranian general while he was in Baghdad. The air strike came after Iranian-backed militias had fired rockets at US targets in Iraq, in a scenario echoed by the latest strikes against the US embassy.

After Soleimani’s killing, the entire region held its breath in anticipation of an uncontrolled escalation which ultimately did not materialize.

But tensions are rising again as the first anniversary of the strike nears and the US leader — in his final weeks in office — is sticking to his “maximum pressure” approach toward the Iranian regime.

Washington has recently reduced its diplomatic staff in the Iraqi capital amid speculations that it could close the mission altogether.