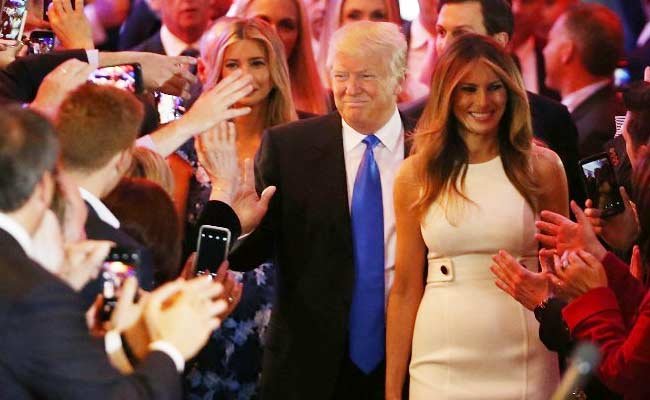 Donald Trump looked all-but-certain of carrying the Republican Party colours in the 2016 presidential election after the billionaire political novice sent his only serious challenger Ted Cruz crashing out of the race.

Addressing jubilant supporters at Trump Tower in New York after romping to his seventh straight state-wide victory in the Indiana primary, the real estate mogul promised them: “We’re going to win in November, and we’re going to win big, and it’s going to be America first.”

Tuesday’s contest in the midwestern state was seen as a final firewall by the “stop Trump” movement seeking to prevent him from locking in the party nomination.

But as the race was called overwhelmingly in Trump’s favor, Cruz conceded to supporters in Indianapolis that he no longer had a viable path forwards.

“We left it all on the field in Indiana,” Cruz said. “We gave it everything we’ve got, but the voters chose another path.”

“And so with a heavy heart, but with boundless optimism for the long-term future of our nation, we are suspending our campaign.”

It was a stunning denouement for the arch-conservative Texas senator who had insisted he would press on to the final day of the Republican race.

His departure leaves the low-polling Ohio Governor John Kasich as Trump’s only challenger for the nomination — making it a virtual certainty that he will go head to head in a general election matchup with the likely Democratic flagbearer Hillary Clinton.

The top echelon of the Republican establishment said as much minutes after Cruz capitulated, with Republican Party chief Reince Priebus declaring Trump the “presumptive” nominee.

“Donald Trump will be presumptive @GOP nominee, we all need to unite and focus on defeating @HillaryClinton,” Priebus said, in an extraordinary move to embrace a candidate the party establishment fought tooth and nail to stop.

Clinton meanwhile suffered an upset in Indiana as her Democratic rival Bernie Sanders mounted a come-from-behind victory, denying the former secretary of state a feather in her cap as she seeks their party’s presidential nomination.

Sanders, a self-declared democratic socialist, beat Clinton by 53.2 percent to 46.8 percent with about three quarters of precincts reporting — although Clinton remained well ahead in the overall delegate battle for the nomination.

Cruz had been hoping to use the midwestern state to block Trump from receiving the 1,237 delegates needed to secure the nomination ahead of the Republican convention in Cleveland in July.

But the bombastic real estate mogul — who has thus far defied all political logic to lead the Republican race — swept the arch-conservative senator aside.

Trump was leading Cruz by about 53 percent to 37 percent, with Kasich languished at less than eight percent.

“Lyin’ Ted Cruz consistently said that he will, and must, win Indiana. If he doesn’t he should drop out of the race-stop wasting time & money,” Trump taunted in a tweet.

With 1,002 delegates to his name, Trump was already in favorable position to reach the magic number needed to avoid a contested party convention. With Cruz out of the race, crossing the threshold is a foregone conclusion for Trump.

Even before the Indiana results, Trump and Clinton had pivoted toward one another.

“That’s where we have to be because we are going to have a tough campaign against a candidate who’ll literally say or do anything,” she said of Trump. “We’re going to take him on at every turn.”

Trump raised the recent National Enquirer story in his interview with Fox News.

“This is just kooky,” an irate Cruz shot back while stumping in Evansville, Indiana, branding Trump a “pathological liar.”

“The man is utterly amoral,” said Cruz, adding that “we are staring at the abyss” if Trump wins the White House.