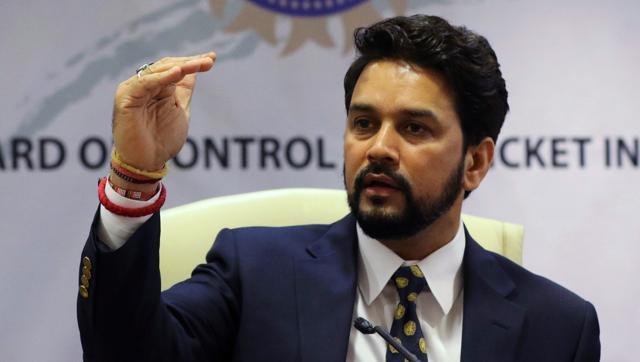 In an ideal world, Anurag Thakur taking over as the Indian cricket Board’s second-youngest president would have been seen as a natural ascension of the most influential official in the game’s pivotal body.

However, the turbulence the BCCI is passing through leaves the 41-year-old political leader facing the challenge of not becoming the last of the old power dispensation but the first in a new order, which the Supreme Court is expected to enforce with its ruling on the Lodha Committee recommendations for the Board’s reforms. Thakur’s elevation was expected once Shashank Manohar stepped down. The Himachal BJP leader had assiduously nursed his political and cricketing constituencies and become the face of BCCI administration, since he took on N Srinivasan as the latter’s conflict of interest pulled down the Board.

The son of the previous Himachal Pradesh chief minister, Prem Kumar Dhumal, Thakur played junior cricket for Punjab before leveraging his political standing to bring his tiny state into the national cricketing mainstream.

He took over as the Himachal association president aged 25, and turned the Dharamsala stadium quickly into an international venue. He courted controversy early on, as in 2000-2001, soon after becoming HPCA chief, effectively selected himself to play his only first-class match.

That made him eligible to become a national junior selector, a position he held for four years. He went on to become an IPL Governing Council member and then BCCI joint secretary in 2011.

He was among the first senior BCCI officials to oppose Srinivasan for inaction following the arrest of his son-in-law and Chennai Super Kings official Gurunath Meiyappan in the 2013 IPL spot-fixing scandal. His political sharpness was also evident when he refused to accept Srinivasan’s support to become BCCI president in March 2015, instead sticking with the opposition camp to be elected secretary by one vote.

Thakur’s biggest challenge now would be tackling the Lodha panel recommendations that will diminish the influence of elected members.

The ‘one man, one post’ diktat will affect Thakur, who also heads the HPCA. The Lodha panel is also against politicians holding office in the Board. And the Board’s AGM will shrink from 30 if the ‘one state, one vote’ kicks in.

The 14-member working committee will be replaced by a nine-member apex council where, apart from the five office-bearers, five others, including two player representatives and a nominee from the Comptroller and Auditor General’s office, will come in.

The president and secretary now takes all decisions, but the Lodha proposal is for the CEO to run day-to-day administrative affairs.

It also remains to be seen whether Thakur, as a key ICC Board member, will challenge steps taken by Manohar to reverse the controversial amendments in 2014 that gave India, Australia and England huge power and financial clout.