This space age pod is your future home 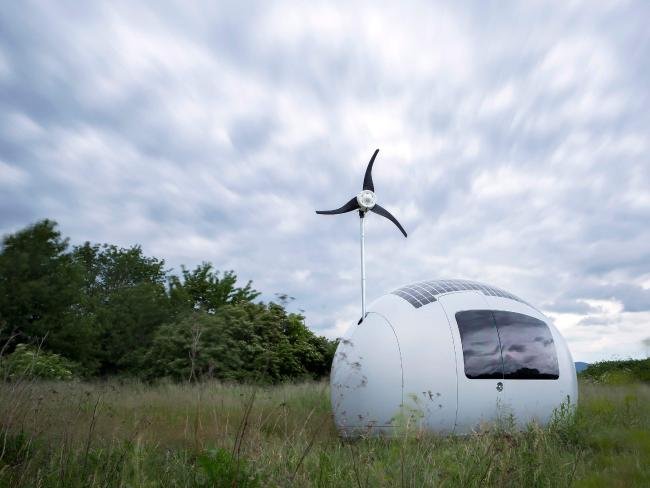 FINALLY, the 21st century is living up to expectations.

A Slovakian architecture company has created an energy-efficient pod that’s the ultimate in sustainable living.

While it’s not quite as futuristic as the Jetsons’ space car — current prototypes are strictly earthbound — the Nice Architects’ “ecocapsule” boasts a space age aesthetic that would give pause to any UFO watcher.

The sleek, egg-shaped abode can be taken almost anywhere, and is powered by solar panels backed up by a retractable wind turbine.

It’s the next big thing among campers, frugalists and those who want to live “off the grid”— including Hollywood star Susan Sarandon, who tweeted her interest.

And at $121,000 (€79,900), it’s a lot more affordable than most Australian homes, making it a promising alternative to the quarter-acre block or overpriced inner-city apartment.

Tucked away inside the 2.25 by 4.5 metre pod are a bedroom, kitchenette, workspace, dining room and ensuite bathroom.

Rain water is filtered for use in the bathroom, and the curved surface area allows for maximum solar rays.

The ecocapsule fits into a standard shipping container and ships to Australia for €1,900 ($2870).

“With its immense off-grid life span, worldwide portability and flexibility, it is suitable for a wide range of applications: from an independent research station or a tourist lodge to an emergency housing or a humanitarian-action unit,” the company writes on its website.

Nice Architects recently unveiled the mini-apartment at the Pioneers Design Festival in Vienna after taking six years in development.

The enthusiastic response sent the creators into overdrive to accommodate the influx of pre-orders.

“We were not prepared for the reaction,” Nice partner Igor Zacek told CNN. “We started small, but now we have to revise our model.”

He said while the product was designed with hotel affiliates and nature lovers in mind, “based on the response, it could be for almost everybody; it has caught the imagination and reminded people of childhood dreams … Google used to house employees in a van until they could afford to buy a house. This could be a better solution.”

Mr Zacek said that while the pod looked small from the outside, it was spacious on the inside.

“There are a lot of options where to go (in future), once we are established on the market, we can play with scenarios.”

Ecocapsule is taking orders for an initial production line of 50 pods, which will be manufactured by early 2017.