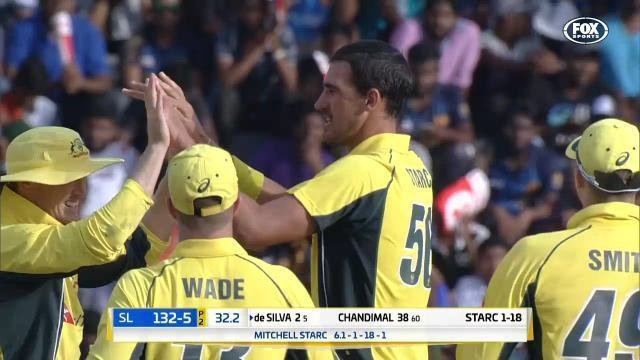 AUSTRALIA has started their one-day international series against Sri Lanka with a win on a pitch opener Aaron Finch labelled the biggest turner he had ever seen.

Australia chose to bowl first and restricted the home side to 8-227 as seamers James Faulkner and Mitchell Starc claimed seven wickets between them.

Starc’s 3-32 included his 100th wicket in his 52nd ODI match, beating the previous world record set in 1997 by Pakistan’s Saqlain Mushtaq of 53 games.

Faulkner was named man of the match for his career-best haul of 4-38, which help set Australia up for a gettable run chase of 228 on a turning pitch.

“We saw how much the ball was spinning,” Finch said.

Finch (56 off 46 balls) went hard against the new ball including a six off the second delivery he faced. Skipper Steve Smith also scored a half-century.

Australia reached their target of 228 in the 47th over with three wickets in hand.

But the tourists are bracing themselves for more raging turners in the five-game series which resumes on Wednesday back at Premadasa Stadium.

“I don’t think I’ve ever played on a wicket that spun that much,” Finch said after Australia beat a side that had six spinners in its attack.

“It was a pretty poor wicket I think, all-round.

“For balls to be going through the top from the second over of the game, I think that was pretty poor.

“We played quite well to track down that total. It seemed like a different spinner was bowling every over.

“I haven’t seen any wickets really that have spun to that extreme, especially in a one-day game, for a long time.

“The wickets that we trained on were probably not even really similar, to be fair.”

Finch said Australia would take a lot of confidence from the win, especially after a 3-0 defeat in the Test series.

“The boys are going to take a lot of confidence from that, just to get the feeling that we can do it in these conditions, in the extreme conditions,” Finch said.

Mathews said the pitch was too dry.

“If it was stopping and gripping for the seamers’ slow ones and also it was turning square,” he said.

Mathews said he expected to see another dry pitch for Wednesday’s clash.

“It will be a dry sort of a wicket but you never know what the curator will come up with,” he said.

Finch said he expected to see more of the same in game two.

“To play against good spinners on a turning wicket that much, that’s probably as hard as it’s going to be in terms of the extreme spin,” Finch said.

It might play similar, but it depends on what they do with the grass.”