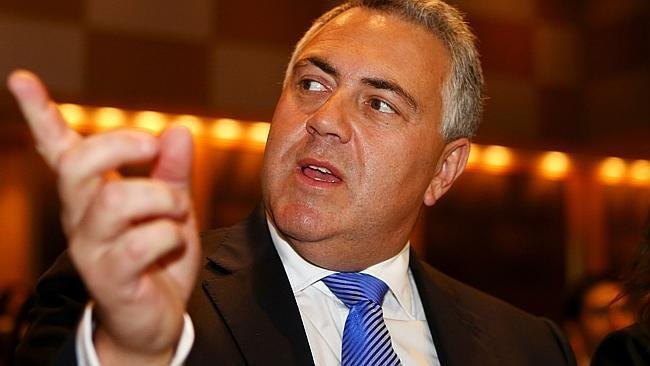 LABOR has pleaded for the ministerial life of Joe Hockey, as a senior Liberal confirmed there was talk of removing the Treasurer.

Shadow Treasurer Chris Bowen warned that dumping the Government’s chief economic spokesman would hit consumer and business confidence and that Mr Hockey should keep his job for the time being.

“Getting rid of a Treasurer, even as bad as this one, would have a blow on consumer confidence and business confidence. It would be a blow to the Australian economy,” Mr Bowen told reporters.

His comments would have been merely political mischief making were it not for a statement from prominent Liberal Arthur Sinodinos blasting ministers for leaking against colleagues.

Senator Sinodinos was responding to Fairfax Media reports that at least two ministers had been urging Mr Hockey’s removal should the September 19 Canning by-election turn out badly for the Government.

Further, it was claimed there were moves to shift him before an early March election — a double dissolution poll — before the May Budget.

“Ministers should be working hard to win the Canning by-election rather than backgrounding against a colleague to scapegoat a potential loss,” said Senator Sinodinos.

“Holding out the prospect of a reshuffle and even a double dissolution election smacks of defeatism and a lack of focus on the substantive issues of governing.

“The Prime Minister should sack any minister or adviser who is engaged in such deliberate leaking and destabilisation. We should be working to achieve a swing to us in this by-election.”

Senator Sinodinos said Labor leader Bill Shorten was the enemy and accused him of “running a cynical union-funded campaign to sabotage Australia’s biggest ever free trade agreement with China”.

Meanwhile, Labor is making the most of what Chris Bowen called “the backstabbing and backgrounding that we see from the highest levels of this government”.

“What’s very clear is a government focused on themselves and not the real issues facing the Australian people,” he said.

“Now I can understand the frustration with the Treasurer. But it is telling that the Government is undermining its own Treasurer not because of his appalling track record on the economy but because of their own political lows.

“They are calling on him to go because of a by-election when they should be focused on his economic performance.”