Sore, but no taller, astronaut Scott Kelly adjusts to Earth 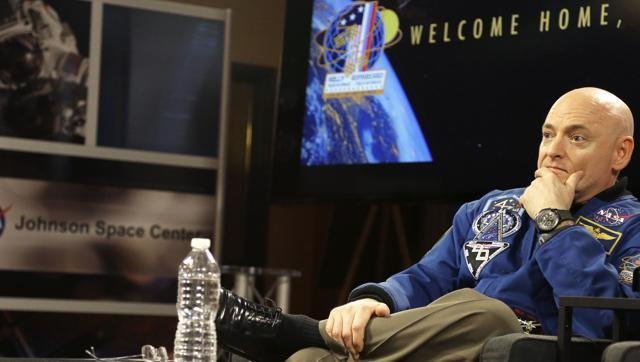 US astronaut Scott Kelly said Friday he is battling fatigue and super-sensitive skin, but is back to his normal height after nearly a year in space.

Kelly’s 340-day mission — spent testing the effects of long-term spaceflight ahead of a future mission to Mars, along with Russian cosmonaut Mikhail Kornienko — wrapped up early Wednesday when they landed in frigid Kazakhstan aboard a Soyuz spacecraft.

One of the effects of spending such a long time in the absence of gravity was that Kelly’s spine expanded temporarily, making him grow 1.5 inches (3.8 centimeters), only to shrink as he returned to Earth.

His twin brother, Mark Kelly, said they were the same height again by the time they hugged in Houston early Thursday.

According to John Charles, human research program associate manager for international science at NASA, any height gain “probably went away very quickly because it is a function of fluid accumulation in the discs between the bones in the spinal column.”

“I don’t know where that came from. I did measure myself and it was an inch and a half, so maybe somebody just decided to just round up and write it as a fact,” he told reporters in his first extended media appearance since his return.

The specifics are important because a team of doctors is carefully researching the genetic, physical and psychological differences between Kelly and his twin, who is also an astronaut but who stayed on Earth to take part in the study.

The details of those ongoing studies are secret for now, as scientists will do further analysis and submit their findings for peer-review before publication.

The idea is to learn more about the harmful effects of spaceflight before NASA greenlights any deep space mission to an asteroid or Mars, journeys that would last a year or more.

The study includes frequent MRIs of the twins’ organs and major vessels, genetic analysis and a close examination of the effects of radiation, which in high enough doses can lead to cancer.

Asked if the brothers noticed anything else different about each other upon being reunited, Scott answered: “He’s got a better tan.”

A veteran of four space missions, 52-year-old Kelly returned to Earth with the record for the longest amount of time spent in space by an American — 520 days. A Russian cosmonaut holds the all-time record.

“It seemed like I’d lived there forever. It was longer than I thought it would be. But having flown before, I did pace myself appropriately,” he told reporters.

Kelly had previously spent six months at the orbiting research lab, and was somewhat prepared for the effects of returning from microgravity.

“Initially this time, coming out of the capsule, I felt better than I did last time,” when his mission lasted 159 days, he said.

But that soon changed.

“My level of muscle soreness and fatigue is a lot higher than it was last time. Maybe there is a linear function to it,” he said.

“I also have an issue with my skin, that because it hadn’t touched anything for so long — like any significant contact — it is very, very sensitive. It is almost like a burning feeling wherever I sit or lie or walk.”

Kelly added that he was wearing dress shoes only because of his televised appearance, and that a more comfortable pair was waiting nearby.

Other changes he noticed were in his fine motor skills. He said he tried to shoot some hoops but missed the basket each time.

Kelly, who recently wore a gorilla suit in space to chase a fellow astronaut as a joke, also poked fun at himself for his first choice of food upon returning to Earth — a banana.

“As soon as I ate half of it, I recognized the irony.”