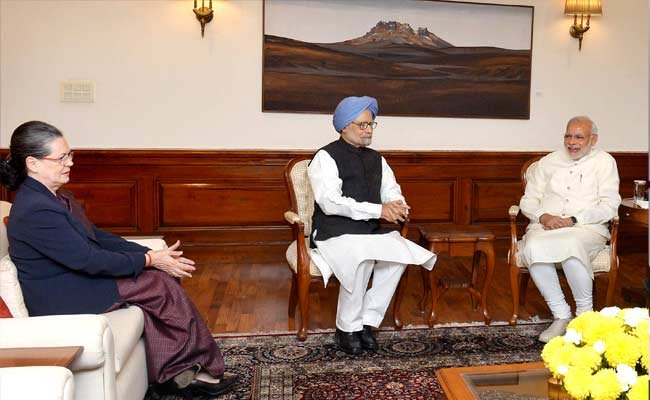 Prime Minister Narendra Modi invited his predecessor Manmohan Singh and Congress president Sonia Gandhi to his home for discussions over tea this evening, in what was seen as an attempt to unlock the Goods and Services Tax or GST, the government’s most ambitious tax reform.

This was the first face-to-face meeting between the prime minister and Sonia Gandhi since his BJP won a landslide victory in the national election last year, ending the Congress-led UPA’s 10-year-rule.

“The PM discussed the GST bill with the Congress which conveyed its three objections over which there were further discussions. The Congress will discuss the government’s response to their three objections within the party after which the two sides will further discuss,” Finance Minister Arun Jaitley said after the meeting. Mr Jaitley and union minister Venkaiah Naidu had also attended the meet.

“Our demands are non-political, we’re only thinking in nation’s interest and want GST which is meaningful,” said Congress’s Anand Sharma.

Speaking in Parliament just before the tea meeting, PM Modi had struck a conciliatory note and said: “Consensus is more important than majority rule.”

Rahul Gandhi, the Congress party’s number two leader, was not invited to the meeting that was immediately dubbed “chai pe charcha” by many.

“This meeting is happening after public pressure,” Mr Gandhi said.

The Congress has repeatedly accused the government of failing to bring the opposition on board on GST, billed as the biggest tax reform since independence.

Yesterday, speaking exclusively to NDTV, Sonia Gandhi and Rahul Gandhi highlighted “three issues” on GST that they said were non-negotiable – the 1% tax for manufacturers, the constitutional cap of 18 percent for GST rate and an independent dispute resolution mechanism for GST.

“Unless the government responds on this we will not compromise,” they said, countering Finance Minister Arun Jaitley’s assertion that he had spoken to every Congress leader on the bill.

The government wants to implement GST by April 2016, but the deadline may be missed if Parliament does not pass the bill in the winter session.

The GST will create a single market in India after doing away with state levies and is expected to boost the economy.