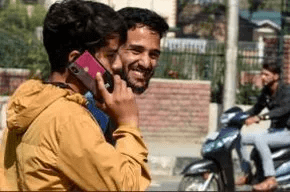 New Delhi: Internet services in all government-run hospitals and SMS facility to all postpaid mobile phones in Kashmir were restored from the midnight of December 31 midnight, PTI reported Jammu and Kashmir official spokesperson Rohit Kansal as saying.

“It has been decided to restore internet connectivity to all government hospitals with effect from midnight of December 31 besides fully restoring SMS on mobile phones,” Kansal told reporters in Jammu.

Internet facilities were snapped on August 5 ahead of Union Home Minister Amit Shah announcing the repeal of Article 370 and bifurcation of the state of Jammu and Kashmir into two Union Territories.

Last week, mobile internet services were restored in Kargil district of Ladakh after remaining suspended for 145 days in the wake of the Centre abrogating provisions of Article 370 of the Constitution.

While landline telephones were gradually restored first, postpaid mobile services were resumed later. However, prepaid mobile and internet services are yet to be resumed in the entire Valley.

On December 10, Kansal had said machine-based SMSes were enabled for mobile phones in Kashmir in order to facilitate students, scholarship aspirants, traders and others, and that restoration of full message services was part of the process.

Kansal, who is also the principal secretary for planning, development and monitoring in the Union Territory administration of Jammu and Kashmir, said the administration in Kashmir is facilitating students, contractors, tour operators, government officials through various internet touch points.

“Nearly 900 such touch points and special counters are functional throughout Kashmir in districts, prominent tourist places and hotels, and about 6 lakh people have taken advantage of these touch points,” he said.

Meanwhile, the Kashmir Press Club on Tuesday demanded immediate restoration of internet services to the media in the Valley since the clampdown has severely crippled the functioning of the fraternity and threatened suspension of publications.

The Kashmir Press Club held a meeting at the club in which all editors’ bodies and journalist associations unanimously demanded restoration of internet services to media fraternity in the Valley without any delay, the club said in a statement. Various media bodies discussed the prolonged and unprecedented internet shutdown which is now nearly five months.

It was observed that the clampdown on internet has severely crippled the functioning of media fraternity in the valley. The participants were of the view that the government has deliberately muzzled the press to control flow of information which has equally impacted the readers who have a right to know the facts. The gag has adversely affected ground reporting and news gathering operations, the statement said.

press club said it has now become untenable for journalists and media organisations to operate out of the makeshift media facilitation centre, housed at the Information Department complex here, which is inadequate to accommodate reporters, editors, photojournalists and video journalists of over 200 publications and scores of bureaus.

The club demanded that the government lift the communication gag and allow free and unconditional access to internet.

To remind the government of its role in ensuring freedom to the fourth estate, the participants unanimously asked the government to take all measures to ensure right to free speech and free expression. To highlight their plight and press for restoration of internet, it was decided to hold series of events which include seminars, silent and peaceful protests and suspension of publications, the press club said.