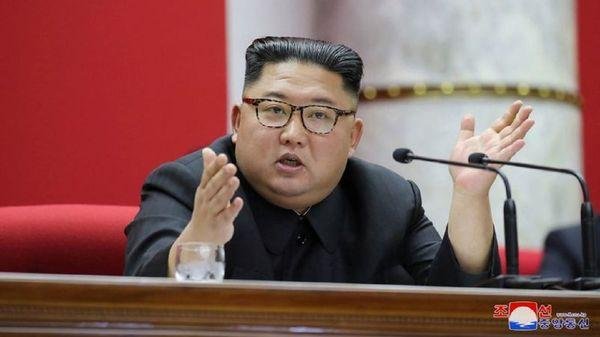 Kim Jong Un warned that North Korea would debut a “new strategic weapon” this year, saying that he was no longer bound by his self-imposed decision to freeze major weapons testing for more than two years.

The North Korean leader told a gathering of party leaders in Pyongyang that the new weapon system had been “perfectly carried out” by scientists, designers and “workers in the field of the munitions industry,” the state-run Korean Central News Agency said Wednesday. The comments were released early New Year’s Day in North Korea, an occasion when Kim has previously made a televised address announcing big policy shifts.

“The world will witness a new strategic weapon to be possessed by the DPRK in the near future,” KCNA said, citing Kim and referring to the country’s formal name.

While showing his frustration for sputtering nuclear talks with the US, Kim still left an opening for President Donald Trump by not explicitly stating he would resume tests or break off the nuclear negotiations that have seen three face-to-face meeting since June 2018. Kim expressed his anger at joint US-South Korean militarily drills, new US weapons being deployed on the peninsula and sanctions, which have been choking North Korea’s paltry economy.

Kim said the US actions had forced him to reconsider a moratorium on tests of nuclear weapons and intercontinental ballistic missiles that could deliver them to the US. “He stressed that under such condition, there is no ground for us to get unilaterally bound to the commitment any longer,” KCNA said.

“North Korea’s moratoriums are meant to be broken,” said Sung-yoon Lee, a professor of US-East Asia relations at Tufts University’s Fletcher School. “North Korea always lays the blame for its actions on the US Kim Jong Un, I believe is setting the stage for the next big provocation to come.”

It was unclear whether Kim would also deliver a separate new year’s speech. Kim could replace his annual address with a policy statement from the plenary, the Seoul-based Yonhap News Agency reported before KCNA issued the report.

In a previous New Year’s address, Kim said he planned to resume tests of ICBMs, but no mention was made of new testing in the latest report. Kim didn’t specify what the new strategic weapon was, or when it would be deployed.

North Korea had expressed increasing frustration with the US since Trump walked out of their last formal summit in February. Kim resumed launches of mostly short-range ballistic missiles at a record-setting pace and repeatedly warned that his freeze on tests on ICBMs might be coming to an end. Trump was not mentioned by name in the report, a sign that Kim has not resorted to the name-calling that punctuated their relationship ahead of their detente.

“In the future, the more the US stalls for time and hesitates in the settlement of the DPRK-US relations, the more helpless it will find itself before the might of the Democratic People’s Republic of Korea,” Kim told the four-day party gathering that ended Tuesday.

While Trump in 2018 claimed that North Korea was “no longer a nuclear threat” and that he and Kim “fell in love,” a deal between the two countries has remained elusive.

Neither side can agree on the terms of disarmament or US-imposed economic sanctions. Meanwhile, North Korea has continued to conduct missile tests and build its nuclear arsenal.

North Korea had suggested a “Christmas gift” would be forthcoming after demanding additional concessions as part of the stalled nuclear talks. Earlier this year, Kim’s regime set a Dec. 31 deadline for a breakthrough. Trump has downplayed any threat, saying on Christmas Eve that the US will “deal with it” and joking that Kim’s “gift” could be a “beautiful vase.”

Robert O’Brien, Trump’s national security adviser, said in December that the US will be ready to respond should Kim fire additional long-range missiles or conduct further nuclear weapons tests.

“We’ll reserve judgment, but the United States will take action as we do in these situations,” O’Brien said on ABC’s “This Week.” “If Kim Jong Un takes that approach, we’ll be extraordinarily disappointed and we’ll demonstrate that disappointment.”

Kim, however, had some ominous words for the US. “He said that we will never allow the impudent US to abuse the DPRK-US dialogue for meeting its sordid aim but will shift to a shocking actual action to make it pay for the pains sustained by our people so far and for the development so far restrained,” KCNA reported him as saying.