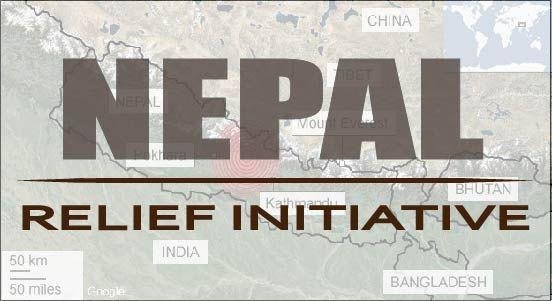 Every bit counts By Vish Viswanathan.

We are all familiar with the loss of life, destruction and chaos that followed the devastating earthquake that hit Nepal on April 25, 2015. The 7.8 magnitude quake near Kathmandu the country’s capital city and a second aftershock a few days later, collectively claimed nearly 9,000 lives, caused countless injuries, destroyed 500,000 homes, annihilated historic monuments and affected a staggering 2.8 million people. The Nepalese Government, and charity and aid organizations continue working tirelessly to ensure the health, safety and wellbeing of its citizens. However, two months after the event, 1.1 million children located in districts most affected are still in urgent need of humanitarian assistance. According to many victims of this double earthquake tragedy, “Everything went back to nothing. We can no longer salvage anything from our modest houses.”

Immediate assistance
For the Nepalese government and aid workers, some of the immediate tasks following this natural tragedy were practical and critical to prevent outbreaks of illness or infections, and to safeguard survivors. These included the removal of dead bodies from rubble and arranging mass funerals; shelter for those whose homes were destroyed; clean water for drinking and washing; renewal of healthcare services as hospitals were destroyed or damaged; psychosocial support for children who experienced profound stress; learning centers and safe spaces to help children get back to a normal routine as quickly as possible; safety and security measures to protect vulnerable children and young girls; and providing funding for all these through responsible organizations.
Nepal’s cultural heritage was hugely affected too, as several monasteries, temples, and heritage buildings of archaeological importance were destroyed. The collapse of the historical and culturally important Bhimsen Dharahara, the nine-story tower, is probably the country’s worst historic loss.

Relief and aid measures
The world instantly rallied to aid Nepal as governments and international charities swung into action, and relief measures are still ongoing. The United Nations Development Programme’s (UNDP) organised an International Donors’ Conference aimed at bolstering the country’s post-disaster reconstruction efforts, titled ‘Toward a Resilient Nepal’. The Nepalese government will release its post-disaster needs assessment to help create an action plan going forward, with support from UNDP and other development partners. With a comprehensive programme spanning three years, UNDP will focus on three main areas of work: revitalizing livelihoods and economic recovery of communities; restoring local governance systems and public service delivery; and helping to build a disaster-resilient Nepal under the leadership of the Government.

Australia’s contribution
Foreign Minister Julie Bishop announced an immediate AUD$5 million aid package of life-saving humanitarian support to Nepal consisting of $2.5 million to assist Australian non-government organizations, $2.0 million to support United Nations partners, and $500,000 to support the Australian Red Cross.  Australia also dispatched two humanitarian experts and a crisis response team to the region. But other organizations and individuals have been independently raising funds and donations, adding their own goodwill contributions for this cause.

SEWA International Australia fundraiser
Sewa International Australia in collaboration with other Indian community organizations and supported by Blacktown Council, organized a fundraiser on May 24 at Bowman Hall in Blacktown. The event was attended by over 400 people, and over $30,000 was raise for the Nepal Earthquake relief fund.
The evening of entertainment began with lighting of the traditional lamp followed by enjoyable music and dance performances, both contemporary and classical. Budding Sydney artist Mili Dakshin created a live charcoal sketch in under 10 minutes which was auctioned off, with all proceeds going to the cause.
Sewa International and its sister organizations began rescue and relief work just three hours after the earthquake struck by distributing drinking water, staples, snack and tarpaulins across many locations. Both organisations successfully deployed more than 1,600 volunteers who have reached over 300 villages in 12 districts. The task is challenging as scattered groups living in makeshift hamlets are hard to reach. However, more than 250 tons of critical relief material has already been distributed.

NUPUR for Nepal
The NUPUR Dance Group, comprising of prominent performing artistes partnered with 10 year old charity organisation Forget me not in organising a fundraiser dance workshop titled ‘NUPUR for Nepal’ on June 8 at the Pennant Hills Community Centre. Organiser Jinnie De from NUPUR stated, “In order to rebuild devastated communities and help to restore faith and livelihoods, every dollar collected will be well utilized.”

OZINDCARE, Sydney
Nonprofit charity organization OZINDCARE organized an event titled ‘Art of India’ on June 21 at the Bahai Function Centre, and donated part of the proceeds to the Nepal Earthquake Relief.

INDAUS, Sydney
Dr Yadu Singh, a prominent community leader swiftly organized a fundraiser within the community to raise $23,000 and handed over the cheque to Nepal’s Consul General Deepak Khadka, to help provide assistance to victims.

Aid from the Aryals
Rajani Aryal who came to Australia as a student from Nepal, began organizing a collection of essential items for the victims. “We started collecting medical items such as masks, sanitiser, nursing pads and clothing items such as blankets and tents, and started sending consignments of these goods for the survivors, who were our top priority,” said Rajani. “The support from the people around me was overwhelming and within a week I managed to send 11 boxes of medical supplies. The rest is still getting dispatched with people travelling to Nepal. I also managed to get my employer Suncorp bank to set up a fundraising appeal and they very generously matched dollar for dollar, to maximize the funds donated,” she added. Rajani and husband Amit, with a few other local Nepalese like Rupesh Shrestha and Juna Shakya, set up a fundraising table at their local shopping centre in Stanhope Gardens. “The support of organisations like Red Cross helped us get approval to set up the fundraiser and  we raised over $2000 within few hours from our local community, which was a great result,” said Rajani enthusiastically. The Aryals and their network of supporters continue to fundraise for their still-suffering compatriots in Nepal.

It is heartening that so many organizations and individuals are coming together, volunteering time and personal funds towards helping the victims and survivors of this terrible natural disaster. It is hoped that such efforts continue and that Nepal finds the strength and courage to rebuild not just its communities and infrastructure, but also its spirit.