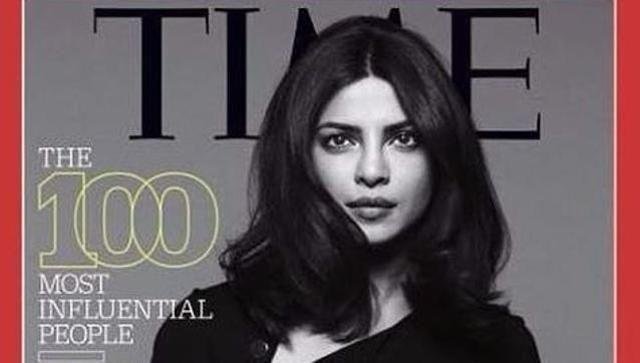 Priyanka Chopra joined the likes of Leonardo DiCaprio, Nicki Minaj, Mark Zuckerberg and Priscilla Chan, Christine Lagarde and Lin-Manuel Miranda as the chosen few to get their own unique covers for Time magazine’s ‘100 most influential people of 2016’ issue, which also includes other Indians Sania Mirza, Raghuram Rajan and others. And now, it has been revealed that none other than Dwayne ‘The Rock’ Johnson has written her piece in the magazine.

Priyanka is currently starring opposite Johnson in 2017’s Baywatch reboot. She broke out in Hollywood in 2015 with a leading role in the TV drama Quantico, for which she won a People’s Choice Award.

In his piece, The Rock writes, “Before ever meeting Priyanka Chopra, I had heard her name coming out of Bollywood and was impressed: she was beautiful, talented, had made nearly 50 movies, earned multiple awards—a massive star.”

“Now I’m lucky enough to be working with her on Baywatch. It’s an amazing time to watch as she pierces the U.S. market. She has an ability to inspire people to do more and achieve more. When I look at her success from the 50,000-ft. view and see everything that Priyanka has already done, is currently doing and has the desire and the bandwidth to do, I can see that her impact is going to be invaluable,” he continues

In a statement to Time, Priyanka Chopra said, “When I was very young, I was 19 and I was doing the first few movies, I remember that my dates weren’t working out. My scheduling wasn’t working out for a movie with a very big actor. And the producer said, ‘Well, she can’t work it out, it’s fine, we’ll just cast someone else. Or, you know what? I’ll launch a new girl because girls are replaceable.’ I didn’t understand it then. But I think subconsciously it really worked on my mind, and I started picking up parts which were strong, which were not just the damsel in distress waiting for someone to rescue me. As much as I like being rescued. Every girl does … Now 13, 15 years later, whatever, I think that the movies that I do, I’m irreplaceable and the boys are replaceable.”

The other Indians to have been included in the list that counts PM Modi and Aamir Khan as past entrants are RBI Governor Raghuram Rajan, Sania Mirza, Flipkart co-founders Binny and Sachin Bansal, Google CEO Sundar Pichai.