Indian beauty Priyanka Chopra is making waves on the global stage not only for her acting prowess – the Quantico star just won herself a second People’s Choice Awards for the hit show – but has emerged as a fashionista to be reckoned with. At the Awards ceremony, Chopra looked fresh as a daisy in this fun, peach Sally LaPointe separates, and we loved how carefree and fun she was in it.

The strapless ruffled asymmetric top with a fringe skirt looked absolutely amazing on her, and this pastel peachy-pink shade definitely gives her a glow, giving her a youngish and fresh vibe. Styled by celebrity stylist Cristina Ehrlich – whom she’s worked with previously as well – the make-up was minimalist with just a shade of pink on the lips. She wore her hair down, casually and slightly messy – which would probably be the only critique we have regarding her look. We would have preferred it blown out with some gorgeous curls instead of this just-out-of-bed-on-a-windy-day version.

She accessorised the look with a pair of strappy silver Casadei sandals, a pair of studs and a diamond ring from Nirav Modi.

The 34-year-old’s look was a far cry from the golden statuette version she’d donned for the Golden Globes Awards earlier this month. She had worn a Ralph Lauren gown with a plunging neckline. Though the gown fitted her well, the make-up was a bit over-the-top and made her look old – definitely not one of her best moments.

Thankfully, that’s in the past, and our stylish Priyanka Chopra’s back with a bang. We love the look so much, we’re simply going to give you all the frames we could get our hands on from the red carpet. 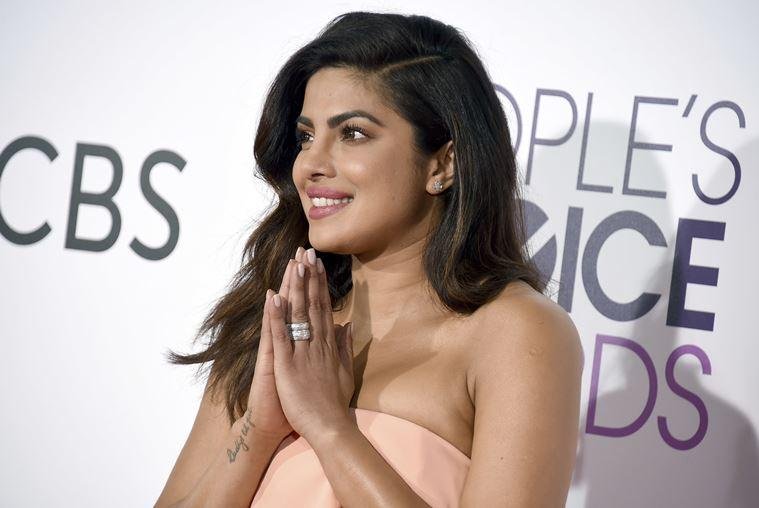