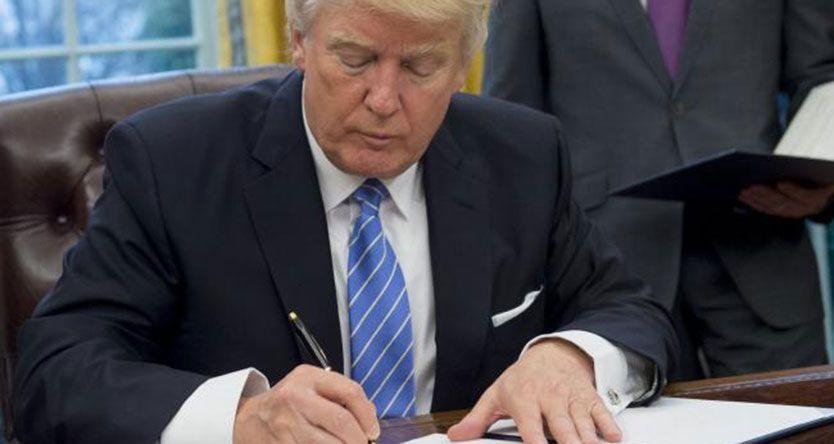 Mr Trump signed an executive order on Monday to withdraw the United States from the TPP.

“Everyone knows what that means, right?” Trump said at the signing ceremony in the White House.

“We’ve been talking about this for a long time … It’s a great thing for the American worker.”

It is a major blow to the Australian government, as Prime Minister Malcolm Turnbull had been holding out hope that Mr Trump might not go ahead with his TPP election promise.

Australian Trade Minster Steven Ciobo, who is in the US, said on the weekend he has been speaking with the remaining TPP nations “on ways to lock in the benefits from the TPP” without US involvement.

Withdrawing from the TPP is one of Mr Trump’s first major moves since being sworn in as president on Friday.

Mr Trump said he is pursuing what he calls “fair trade”, as opposed to purely free trade, and he has China and Japan in his sights.

He called out Japan for making it “impossible to sell” American cars in Japan. “If you want to sell something into China and other countries it’s very, very hard,” Trump told a meeting of chief executives of some of America’s biggest companies.

“I don’t call that free trade. What we want is fair trade.”

In the meeting with company heads, including Australian Dow Chemical chief executive Andrew Liveris, who was appointed as one of Trump’s key advisers, the president laid out his plans to cut regulations for businesses in the US and slash the company tax rate from 35 per cent “down to anywhere from 15 to 20 per cent”.

“What we want to do is bring manufacturing back to our country,” he told Liveris and the chief executives of other companies including Ford, US Steel and Lockheed Martin.

He said companies that moved factories out of the US and then tried to sell their products back to America would be punished with a “very major border tax”.