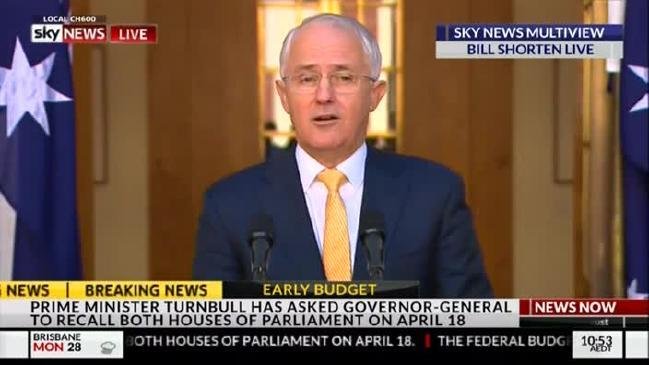 PRIME Minister Malcolm Turnbull has set up a trigger for a double dissolution election.

A July 2 election is looking more likely after Mr Turnbull said politicians would be recalled to parliament on April 18 to reconsider two pieces of legislation aimed at addressing union corruption in the building and construction industry.

The Senate will be given three weeks to pass the legislation or face a double-dissolution election.

“The time for playing games is over,” Mr Turnbull told reporters in Canberra this morning.

To ensure the Budget is passed and considered well before the start of an election campaign, Mr Turnbull announced the Budget would be brought forward to May 3. It would normally have been delivered on May 10.

The Prime Minister noted that if the Senate did pass the new laws, he would not call a double dissolution election, but the Budget would still be brought forward.

Mr Turnbull said the Australian Building and Construction Commission Bills and the Registered Organisations Bill, were a very important economic reform that had been blocked in the Senate.

Mr Turnbull said he made no apology for interrupting senators’ seven-week break to bring them back to deal with this legislation.

“This is an opportunity for the Senate to do its job of legislating rather than filibustering,” he said.

“The go-slows and obstruction by Labor and the Greens on this key legislation must end.

“The Senate will have an additional three sitting weeks to deal with the ABCC and registered organisations legislation. Plenty of time to pass these important laws.”

WHAT’S ALL THE FUSS ABOUT?

Reinstating the Australian Building and Construction Commission, an independent body to monitor and promote workplace relations in the building and construction industry, was a key commitment of the Coalition’s election platform.

Tony Abbott won a mandate at the 2013 election for the re-establishment of the ABCC but the Senate had essentially ignored it for nearly three years.

Corruption, violence, and threats have been shown to exist in the building and construction industry by four different royal commissions over the past 40 years.

The most recent, from Dyson Heydon, concluded that there is “systemic” corruption and unlawful conduct, including corrupt payments, physical and verbal violence, threats, intimidation, abuse of right of entry permits, secondary boycotts, breaches of fiduciary duty.

The Bills were reintroduced in the first week of Parliament this year but Labor, Greens and crossbench voted in the Senate to send the Bills to a committee for another review.

“This was the fifth review the Bills have undergone,” Mr Turnbull said.

“The committee came to the same conclusion it had on the last time it considered them. Nothing new was raised or considered; it was just a delaying tactic.”