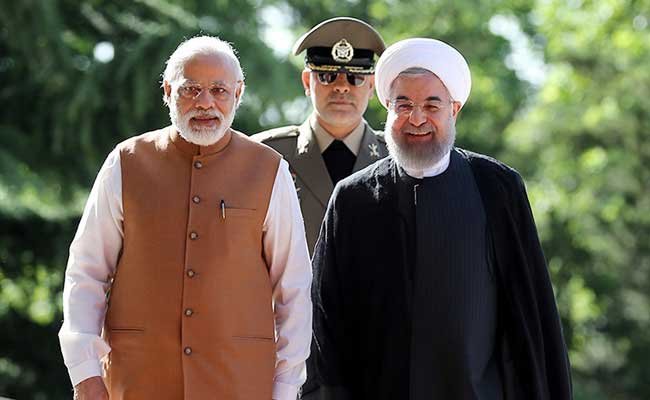 Iran took a step closer to energy-hungry Asian nations India and Afghanistan as it looks to recover from a decade of international sanctions.

The Persian Gulf nation signed a three-nation agreement on Monday to develop its southern Chabahar port, a project first proposed in 2003 that had been suspended following the tightening of sanctions against Iran over its nuclear program. Indian Prime Minister Narendra Modi and Afghan leader Ashraf Ghani visited Tehran to finalize the deal.

“With our joint investments in Chabahar we can connect India through a reliable route to Afghanistan and countries in Central Asia,” Iranian President Hassan Rouhani said in a televised press conference with the two leaders. “The agreement today is not only an economic document: It’s also a political and a regional one.”

Speaking earlier in the Iranian capital, Modi said his country will open a $500-million line of credit to develop the port, located on Iran’s Gulf of Oman coast, into a regional trading hub. About a fifth of the oil consumed globally each day passes through the Strait of Hormuz, a shipping choke point that separates the Persian Gulf from the Gulf of Oman and Indian Ocean.

Modi’s visit comes four months after most economic sanctions against Iran were lifted in line with a nuclear deal with world powers last year. The development is allowing the country to return to the international fold after being starved of foreign investment and technology.

“Investing in the Chabahar port is advantageous for India,” Ebrahim Jamili, who heads the Iran-India business council, told the state-run Iranian Students News Agency. “It’s also important for Iran that this port becomes active as it has a strategic location and is in need of foreign investment.”

While analysis of what Iran’s opening means has concentrated on the nation’s rivals in the Middle East, the ramifications are also critical for Asia.

For Afghanistan, the nearby port and its access to the Indian Ocean could be used to ship Afghan commodities. The nation hopes to exploit as much as $1 trillion of untapped mineral wealth to earn revenue that will reduce its reliance on the United States, which pays for about 75 percent of Afghanistan’s military budget.

“The corridor would spur unhindered flow of commerce throughout the region,” Modi said at the signing ceremony. Compared to traditional sea routes, it could lower the cost and time taken to move cargo to Europe by about 50 percent, he said.

The agreement’s “success will be positive for both peace and stability in the region,” Modi said.

Iran and India’s historical links date back to antiquity, when Indus Valley merchants plied routes to Mesopotamia. Persian artists sculpted the Mughal architecture of India’s north, influencing structures such as the Taj Mahal. More recently, India was one of Iran’s top oil buyers before international sanctions against Iran peaked in 2012.