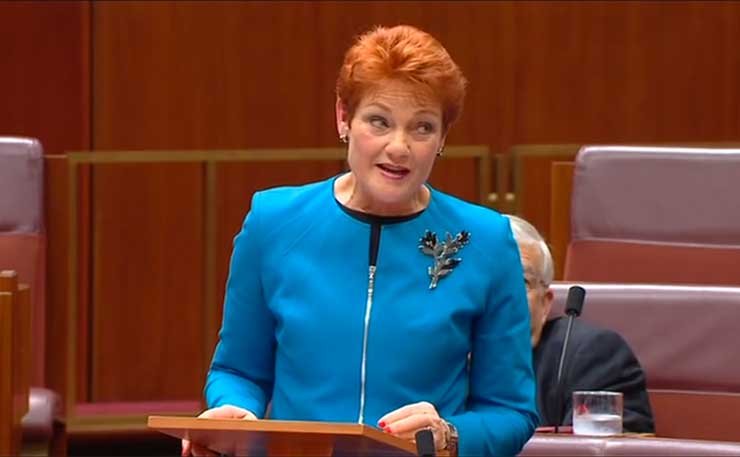 The development website the place an apprentice died after plunging 20 metres by means of a glass roof was inspected 3 times prior...
Read more
Australia

In September 2016, One Nation Senator Pauline Hanson has heralded her political comeback in her first speech in the Australian Senate. Senator Pauline Hanson claimed the nation was “in danger of being swamped by Muslims” with its people “living under Sharia law and treated as second-class citizens” if urgent changes weren’t made to immigration policies. Such an open attack on the Australian Muslim community has caused a furore and reactions in the multicultural communities Australia.  According to the 2011 census, Islam is the fourth largest religious group in Australia with 476,291 Muslims in Australia (2.2 percent of the total population).

In her maiden speech in the Australian Parliament in 1996 too, Pauline Hanson proposed a drastic reduction in immigration saying that “I and most Australians want our immigration policy radically reviewed and that of multiculturalism abolished. I believe we are in danger of being swamped by Asians.” She condemned multiculturalism as a “threat to the very basis of the Australian culture, identity and shared values.”

The Indian Telegraph talked to some prominent members of the Australian Indian subcontinent to know their reactions to Pauline Hanson’s recent comments and what measures they expected from the Federal government to protect multiculturism.

Nobody should generalise on any community. Australia is the most multicultural country in the world. That is why many of us have chosen Australia as our home.  I have been in Australia since last 32 years. There are undercurrents of racism. However, such undercurrents in the society can be felt all over the world. It is totally wrong to blame one religion. No religion teaches wrong things. Every religion teaches mutual respect.  What some of the radicalised individuals are trying to disrupt community harmony is totally wrong. I have a number of friends in the Muslim community and known them a long time as peace loving people.

Senator Pauline Hanson represents a sizable portion of the Australian community and thought. She also has a right to express her views and opinions.  I don’t agree with every view and opinion of hers. With Muslims constituting about 2% of Australia’s population, she is perhaps factually incorrect on this matter too.

Australia can take pride in its race and religion-neutral immigration programme. Australia welcomes everyone, but there is an obligation on those who received this welcome to integrate with Australian society and values. There should not be any welcome for those who hate Australia, Australians and its systems and values.

Political correctness, when leaders don’t call a spade a spade, and abrogation of responsibility by community representatives in not countering obnoxious views from some of their own are the reasons why we will have leaders like Pauline Hanson saying things which may sound extreme but surely reflect the thoughts and views of quite many.

People like Pauline Hanson repudiate the values of our tolerant, multicultural Australian society and need to be condemned by all sane thinking people. Her politics are based on hate and fear, and always seeks to target minorities with its venom. Her first targets were Asians, and this time around it is Muslims. Muslims have lived here for centuries, in harmony with our fellow Australians, contributing meaningfully to our communities. I trust in Australians to rise above the hatred that Hanson espouses, but the government needs to be leading the fight against the vilification of Muslims, and minorities in general. Measures like protecting s.18C of the Race Discrimination Act 1975, the reinforcement of human rights in our asylum seeker policies, and the continued engagement of the Islamic community in the fight against extremism will go a long way in showing Hanson and her like that we can solve our problems when we stand together.

I assert that Australian should embrace the reality of multiculturalism. No wonder the mass may belong to Christian or Muslims or Hindus or Buddhist or any other religion, but the fact is that Australia has become a multicultural society and we as citizens of Australia should acknowledge the multicultural mix of people. There is no place to exclude certain community from the mix of Australian multicultural communities. It is wrong to say that a senator representing a certain section of the people of Australia has a right to express anything. This will affect the sovereignty of country Australia. If every Senator or MP expresses their opinion the way they think, then it will bring disunity among the communities and may end up in civil unrest between communities.

The federal and state government has the responsibilities to protect the people of Australia, and the respective governments should work together to bring unity among communities. They should be able to censor such speeches in the parliament that may disintegrate the nation.

People migrating to Australia have the responsibilities to understand the culture of Australia as well as obey the law of the land. They should run screening programs on migrants before they are allowed into this land. Strict migration procedure should be followed for migrants coming as a refugee.

Australia has a strong tradition of secular government upholding the unity of all religions and cultures. As I understand, the Constitution of Australia even prohibits the government from interfering with the freedom of religion. Events such as the 19th–century Australian gold rushes brought adherents of the various Chinese religions and the requirements of the pre-mechanized era of transport brought specialized workers from British India, such as the mainly Muslim “Afghan Cameleers.” Hence Muslims form part of the Australian history. Pauline Hanson’s expression, in the guise of freedom of speech, can in no way help for the coherence of the Australian community. The Australian community is made up of migrants from various parts of the world practicing different religion and culture. Muslim migrants also form part of the Australian community and have now completely integrated into the mainstream with their kids studying in Australian schools and their adults contributing to the Australian economy and its growth like any other migrant community. I firmly believe that these kinds of comments are floating only due to not understanding the religion well enough. Islam is a religion of peace and patience and among Muslims, those who do not uphold this, in my opinion, are not Muslims.

Before making such comments, by people’s representatives or by anyone, about Muslims or those who are practicing the religion of Islam, my earnest advice will be to please ask the Muslims in Australia and they can explain what Islam is and how Muslim brothers and sisters treat and respect others within the same community and society they are part of. Throughout history, Muslims have led peacefully beside other religions and have always accepted other religions. Islamic laws and abiding by them are for the peace of the humanity and practising these laws will only lead to the enrichment of the whole human family. On the other hand, blatantly condemning the entire religion and Muslims can only upset the Australian people and the communities that these officials are representing”.
Abbas Raza Alvi – President, Indian Crescent Society of Australia Inc.

Australians, irrespective of any religious background and including those who do not believe in religion, all contribute towards the development of Modern Australia. Christians, Muslims, Hindu, Buddhist, Jews, Parsis or any other religion/ faith are an integral part of this garden and can’t be excluded from this.

On the issue of Sharia law, Sharia law can only be implemented in an Islamic Government. Sharia laws are not even applicable in a number of Muslim countries where the majority of the population is Muslim.

Ms. Pauline Hanson’s approach is to polarize the Australian communities for selfish political interests and is dangerous for Australians. Although she named her party as One Nation for many years, she is promoting policies of division. From her earlier days, she started about the indigenous community, then Chinese, then Indians and now Muslims. Perhaps we need to redefine whether this is the ONE NATION party or the “DIVIDED NATION” party?

I do suggest that the Federal Parliament should consider passing a resolution that an elected member of parliament or a senator should represent an inclusive Australia.

I see Paulin Hanson as someone who doesn’t have any knowledge of Islam. By making negative statements about Islam and Muslims she only divides the communities. Islam is a peaceful religion and all Muslims in Australia condemn the act of terrorism and harm to this wonderful country of us (Australia). All Muslims in Australia and around the world condemn ISIS and their cruelty towards the human race.

I am a proud Australian Muslim who loves and respects Australia. The federal government should introduce programs to promote diversity in schools, communities, and workplace, protect the integrity of the Racial Discrimination Act and provide education resources about multiculturalism and its benefits to Australia

I am afraid it appears that Pauline 2.0 is no different to her previous version almost 20 years ago. Then she had the Asian community in her sights this time she has the Muslim Community.

As I have always maintained that all Australians no matter who they are or where they come from must be loyal to Australia and respect its way of life. But such divisive and hurtful comments strain the rich fabric of our multicultural community.

Does this mean that people like Ms. Hanson should be gagged by the Government? I don’t think that it will be a step in the right direction either. It will be akin to adding fuel to the fire and will give people like her another reason to express and hold such offensive views.

I also believe that mainstream Media should also take some onus and steer away from sensational journalism, as they inadvertently assist in promoting such views.

As I speak, Australia – the world’s best country – is accepting with open arms and caring for thousands of people fleeing terrible atrocities, a large number of whom are Muslims. This generosity has been extended for decades. It is not just Australia’s multiculturalism that is protected; it is also our humanity and graciousness.

Senator Pauline Hanson is a democratically elected leader that I respect voted in by people that I respect. She is ultimately representing a parliament that is committed to the privilege of all Australians to enjoy equal rights, be treated with equal respect regardless of race, colour, creed or origin; committed to maintaining an immigration policy wholly non-discriminatory; and committed to maintaining Australia as a culturally diverse, tolerant and open society.

Note: The views and opinions expressed by the above individuals do not necessarily reflect the opinion or bound by the Indian Telegraph.

If you have a comment or a suggestion, write to us at comments@theindiantelegraph.com.au. We will publish your letter in our next issue

A stretch of road in the Gold Coast hinterland has become a pseudo racetrack with a police blitz nabbing 60 motorists for exceeding...
Read more
Australia

Humble Penrith lock Isaah Yeo isn’t big on self-praise as he prefers to let his actions do the talking, but he is a...
Read more
Australia

When Are You Procrastinating? And Is It Bad For You?

Everyone procrastinates. If you ever meet a person who claims they never procrastinate, you’re probably dealing with a robot.
Read more
Feature Story

National Mental Health Month is an initiative of the Mental Health Foundation Australia (MHFA) to advocate for and raise awareness of Australian...
Read more

A stretch of road in the Gold Coast hinterland has become a pseudo racetrack with a police blitz nabbing 60 motorists for exceeding...
Read more
Australia

Humble Penrith lock Isaah Yeo isn’t big on self-praise as he prefers to let his actions do the talking, but he is a...
Read more