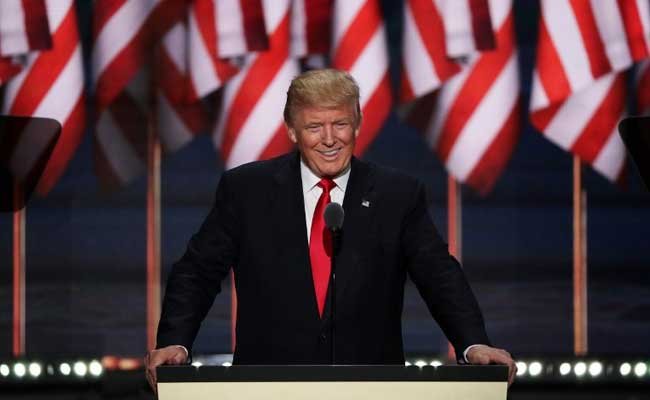 Mr Trump, 70, also confirmed that he would be addressing an Indian-American event in New Jersey next month, the proceeds of which will benefit global victims of terror.

“The Hindu community has made fantastic contributions to world civilisation and to American culture, and we look forward to celebrating our shared values of free enterprise, hard work, family values, and a strong American foreign policy,” Mr Trump said in a statement.

He issued a short 24-second video message inviting Indian-Americans to attend the “incredible” event on October 15.

“Hello everyone, it is my pleasure to invite you to a Republican Hindu Coalition rally at the PNC Arts Center in New Jersey. I am very much looking forward to speaking to thousands of Indian-Americans and others about making America great again. I look forward to seeing everybody there. It would be an incredible evening,” Mr Trump said in his video message.

According to the Trump Campaign, the all-day event brings together top actors, dancers, and singers from Bollywood, Hindu spiritual and civic leaders for a celebration of Hindu culture and heritage.

“The proceeds of the event will benefit global victims of Islamic terror,” the campaign said, adding that the event christened ‘Humanity United Against Terror’ has been organised by Republican Hindu Coalition, which is founded and headed by Indian-American Shalli Kumar from Illinois.

“I am looking forward to joining my good friend Shalli Kumar, founder and chairman of the Republican Hindu Coalition for this terrific event,” Mr Trump said in an accompanying statement issued by his campaign.

Mr Kumar, who on Sunday was appointed by Donald Trump to his advisory committee for people from Asia Pacific region, said he expects some 10,000 people to turn out for the event.
This is for the first time in the last two presidential elections that a presidential has confirmed to attend a public Indian-American event.

Mr Trump’s decision is seen as an attempt to woo the Indian-American community who can play a key role in some of the battle ground States like Virginia if the race is close.

Hillary Clinton, the Democratic presidential nominee, has held and attended a series of fund raisers organised by Indian-Americans across the country including at their homes.

But those are all closed door events away from public glare.

Ms Clinton, 68, often called as Senator from Punjab, and has a large following among the Indian-Americans is yet to make any public appearance before the community.

But she has appointed a large number of Indian-Americans in her campaign team.

A recent Pew Survey had said that Indian-Americans overwhelmingly vote for Democrats.