Friends and neighbours in his US hometown of Hamilton, New Jersey, knew Oswald as a gifted writer, a music buff and the kind of guy parents wanted their sons to hang around and their daughters to date.

On January 27, Andrew died at the age of 23. His parents unsparingly shared his secret in his obituary.

“Our beautiful son, Andrew, died from an overdose of heroin,” read the first sentence.

It’s a grim trend that follows the explosion of deaths around America due to opioid addiction. Once a forum for sweet memories and floral language, obituaries for the casualties of opioids are becoming a platform for frank cautionary tales.

“We want to share his story in the hope that lives may be saved and his death will not be in vain,” Oswald’s parents explained farther down in the obituary. “Addiction is a mental illness. No one plans to be an addict.”

If baring the shame behind the failed struggle of a lost soul is jarring to other friends and family, that’s just the point. Now, there even is a Twitter account that posts links to the obituaries of people who have died of overdoses or tainted opioids.

“None of his friends knew he was doing drugs until he went to rehab,” said Andrew’s mother, Stephanie, of her only child. “It’s the dirty little secret.” 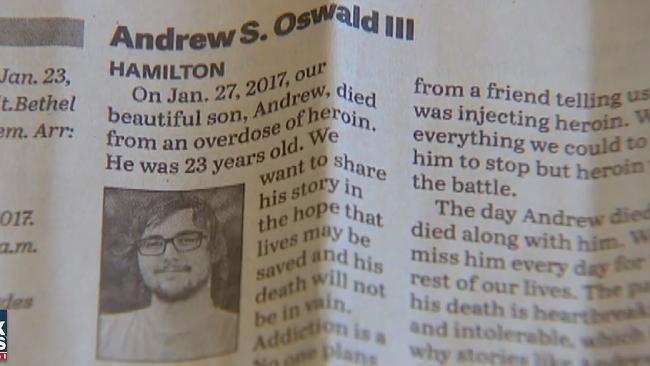 Health experts liken the opioid epidemic to that of the early spread of HIV in the 1980s. It defies boundaries, sowing death and misery in cities, suburbs and rural areas alike, and claiming victims from the ranks of the homeless and the ultra-successful.

The roots of this addiction, typically a pain-inducing injury and a well-intended treatment that festers long after serving its purpose, explain its egalitarian reach.

Though recognised medically as a disease, addiction carries a stigma. And when dependence on prescription drugs prompts victims to turn to their illicit cousins, such as heroin, the stigma looms even larger. People can take a dark, condemning view of them and their families.

The Oswalds knew they were sacrificing their son’s sanitised legacy, but believe they did so for a higher purpose.

“I was hesitant,” Stephanie Oswald told Fox News of writing a forthright obituary. “I felt like I would be outing my son,” said the mother about her only child, whose ashes she wears in a locket on a chain around her neck. “My husband said ‘We’re putting it in there. Tell them, tell them that they’re playing Russian Roulette’ if they take opioids or heroin.”

It didn’t take long for the family to see the impact of the agonising decision.

Hundreds showed up to Andrew’s funeral; many were relatives of people who were dealing with addiction, or who had died of overdoses. They told Andrew’s parents they had found comfort in the obituary’s message about how the addiction was not a failure or weakness, but a disease. 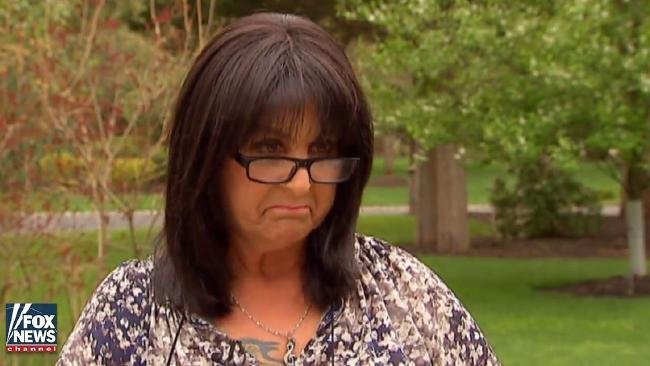 In Connecticut, corporate executive Amy Andreana hid her daughter Lisa’s battle with opioid addiction from co-workers and bosses. Lisa had become dependent on opioids first, and then heroin. She battled through numerous detox programs as she clung to her dream of going to Harvard. During her windows of sobriety, she envisioned going to schools with her mother to talk about opioids and addiction.

“You live with this burden of secrecy,” Andreana said. “I kept it private. I work in a high level job in insurance. I didn’t want to bring it to work with me. I compartmentalised it.”

Last June, Lisa died at age 22. Her mother said Lisa apparently thought was she was consuming heroin, but it was fentanyl, a synthetic painkiller that looks like heroin but is 50 times stronger and 100 times more powerful than morphine.

“When she died, I immediately thought ‘I am not going to hide this,’” Andreana said. “I called my boss and told him. The support I got was overwhelming.”

Like the Oswalds, she decided to address the addiction in Lisa’s obituary. She was met with bewilderment by some relatives.

In February of 2016, Keith Kinsman, a business owner, walked out of his home one morning and found his son Ben, 28, lying dead in the snow in their front yard. Kinsman had spent the night worried sick about the whereabouts of Ben, who developed an opioid addiction after getting a prescription for a collapsed lung. He had been drug-free for several months, but took a lethal dose of heroin.

Kinsman’s eulogy combined his son’s many endearing qualities with a warning to the community not to turn a blind eye to the killer in town.

“I told the truth at Ben’s funeral,” Kinsman said. “I knew he would have wanted me to.”

He wanted people to stop seeing addicts as losers.

A recording of the eulogy was downloaded thousands of times, and reached countless strangers far and wide. A vigil for Ben and addiction awareness drew hundreds of people. Neighbors, friends and strangers sought the elder Kinsman out to confide about their own opioid addiction, or that of their child or spouse.

“Young people came to me and said ‘Keith, you need to tell them, I’m sick of seeing my friends addicted, dying.’”

In 2014, when such candor in obituaries and eulogies was rare, New York father Brian Hunt wrote an open letter to his community. It appeared in a full page in the Staten Island Advance newspaper after his son Adam died of acute heroin intoxication following months of staying clean.

“My 23-year-old son Adam passed away on March 2nd as result of this terrible drug epidemic that has a grip on Staten Island,” the letter began. “My son was a good, loving young man and had all to live for… I want to make my son’s life and the struggle that he had to stay clean mean something.”

As with other parents, Hunt made the painful decision to memorialize a loved one with a brutal honesty that he could only hope might spare another parent his anguish.

“I want other parents to know you can no longer say ‘not my kid,’” said Hunt, who recently addressed a gathering of parents of addicted children in a Staten Island school.

“You guys are blessed,” Hunt said. “Even though you have a child with an addiction, you know what you guys have that I don’t? You have hope, you have a whole world of tomorrows.”

– This story originally appeared on Fox News and is republished with permission.