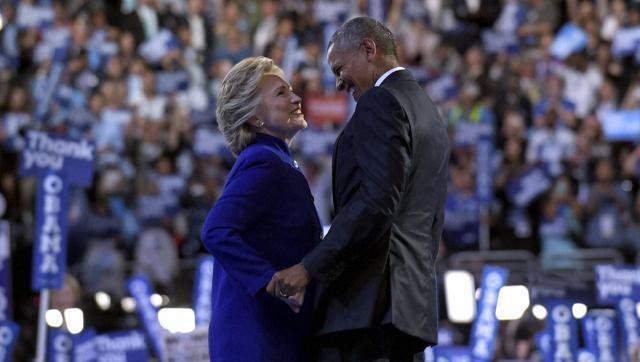 It had been a long, hot and humid day. But there was a spring in their step and smile on their face when those at the Democratic National Convention left for home late on Wednesday night. There was new hope, and a new confidence.

The Democrats’ campaigner-in-chief, President Barack Obama, had breathed new life into a convention that had seemed sullen over unmet expectations and racked by doubts about an imperfect nominee.

“She knows she’s made mistakes, just like I have; just like we all do,” Obama said, adding Hillary Clinton was still far better qualified for the job than “both me, and Bill (former president Bill Clinton)”.

That endorsement came from a president who has been gaining in popularity, unlike most of his predecessors at this stage of their term. And he was generous with his popularity on Wednesday night, urging his supporters to back Clinton.

“Time and again, you’ve picked me up,” he said. “Tonight, I ask you to do for Hillary Clinton what you did for me.I ask you to carry her the same way you carried me.”

The Wells Fargo sporting arena, packed to capacity, erupted. Delegates — all of them, including supporters of Clinton’s rival Bernie Sanders — sprang to their feet, shouting slogans, waving signs.

When Obama finished, Clinton, the nominee and his one-time secretary of state, emerged from the wings in a surprise appearance, and they hugged, and hugged for a long time.

They walked around the massive stage, hugging, talking and holding up hands clasped in solidarity, and a delegate said later, rushing to catch a train downtown, “everyone felt reassured”.

But Democrats expect addresses by the president, by First Lady Michelle Obama, who spoke on the first day of the convention, and by vice president Joe Biden and his wife Jill, who spoke on Wednesday, will help.

“He (Obama) bridged that gap today,” said Bob Jones, a delegate from Maryland, referring to the disconnect some in the party, and independents, have felt from their nominee.

Obama’s speech was to be the high point of the day, during which Clinton’s running mate Tim Kaine accepted the nomination and other speakers pitched for the nominee.

Vice president Joe Biden was among them, speaking just before Kaine. And it became clear from his speech what he and Obama intended to do — speak a bit about Donald Trump.

Referring to a phrase Trump made famous in his reality TV show, The Apprentice, Biden asked, “How can there be pleasure in saying, ‘You’re fired’?

“He’s trying to say he cares about the middle class? Give me a break,” Biden said, following up with a word he has himself made famous. “That’s a bunch of malarkey.”

Other speakers were less kind. Martin O’Malley, a former Maryland governor who ran against Clinton for the ticket, called Trump a “carnival barker” and a “racist”.

The party that spent the first two days of the convention mollifying Bernie Sanders supporters finally put the controversy behind it and seemed ready and eager to move on. And it showed.

“You can tell from their faces and the way they are walking,” Soo-Jin Park, correspondent of a South Korean news daily, said while walking with crowds streaming out of the convention centre.

They were, indeed. Feeling the audacity to hope again, as Obama urged them in his speech, reprising the title of the book that drove his 2008 campaign, “The audacity of hope”.