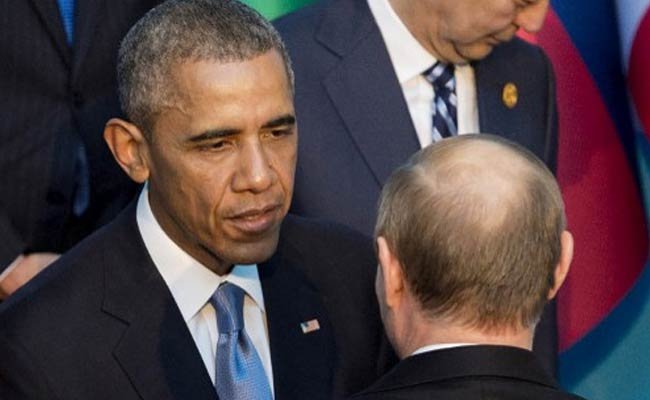 Antalya, Turkey:  US President Barack Obama and Vladimir Putin of Russia agreed Sunday on a UN role to end the bloodshed in Syria, as the Paris attacks jolted leaders into seeking a united front against Islamic State jihadists.

Putting aside important differences, Obama and Putin met over a coffee table on the sidelines of the Group of 20 summit in Turkey after the Paris bombing and shooting assaults, which killed at least 129 people and sparked global outrage.

“The conversation lasted approximately 35 minutes and centred around ongoing efforts to resolve the conflict in Syria, an imperative made all the more urgent by the horrifying terrorist attacks in Paris,” a US official said.

The Kremlin said “divergences” remained on strategy but the tone was described as “constructive” by a US official.

It was the two presidents’ first meeting since Russia in September launched an air campaign in Syria which the Kremlin insists is aimed against Islamic State (IS) jihadists. The West however suspects Moscow’s true aim is to target opponents of Syrian President Bashar al-Assad.

Obama and Putin nevertheless agreed on the need for United Nations talks, a ceasefire and a transition government in Syria, the US official said, seeking a way out of a four-year war in which IS jihadists have thrived, occupying large swathes of territory and displacing millions of people.

The strategy echoed a plan for Syria already forged by diplomats at talks in Vienna the previous day, but it still appeared to mark a perceptible thaw in the icy relations between the former Cold War foes and their leaders.

In images captured on Turkish public television, Putin and Obama were seen leaning in to each other as they held animated talks on the fringes of the gathering of the Group of 20 leading world economies in the Mediterranean resort of Antalya.

The Paris attacks on Friday have darkened the mood and injected urgency into anti-terrorism discussions at the G20 summit, which is also grappling with the spreading refugee crisis, climate change and tax avoidance by multinational corporations.

Host President Recep Tayyip Erdogan declared a minute of silence for the Paris victims before the plenary session got under way.
All musical events, including at the official dinner on Sunday night, have been cancelled as a mark of respect for the victims and Turkish state media said the already tight security at the summit was stepped up.

French leader Francois Hollande has cancelled his participation in the summit, remaining home to lead his shaken country in the aftermath of the atrocities and sending his foreign minister in his stead.

In a reminder of the global spread of jihadist extremists, Obama condemned the Paris massacre as well as a double suicide bombing in Ankara that killed 102 people last month while also offering his “deep condolences” to Putin over the crash of a Russian passenger plane of Egypt on October 31 that killed all 224 people aboard.

The West suspects the plane was downed by a bomb placed by Islamic State militants.

Turkey also said it had foiled a major IS attack plot in its biggest city Istanbul on Friday, the same day as the Paris attacks.

Chinese President Xi Jinping described terrorism as a “common enemy” and called for “a joint front to fight against” the threat.

The migrant crisis is a key topic at the summit here, with Turkey housing some 2.2 million Syrian refugees but the European Union urging Ankara to do more to prevent migrants undertaking risky boat crossings to reach the EU.

European Commission head Jean-Claude Juncker warned that the attacks in Paris should in no way poison the sensitive debate over refugees.

“Those who organised, who perpetrated the attacks are the very same people who the refugees are fleeing and not the opposite,” Juncker said.

Discussions on climate change will assume greater importance than usual coming ahead of a UN climate conference in Paris at the end of the month that aims to agree a global pact to curb warming of the planet.