This Is Not Rahul Gandhi Sleeping In Parliament, Says Congress Refuting Mayawati 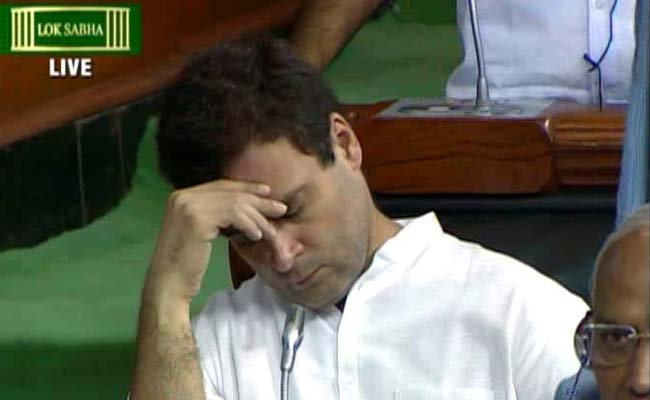 Rahul Gandhi was not sleeping during this morning’s debate in Parliament about the recent attacks on Dalits in Gujarat, his party clarified, not the first time it has been forced to assert his vigilance in the face of evidence to the contrary.

Some Congress leaders told reporters that the 46-year-old was checking his inbox. “It’s not a crime to check a cellphone,” said Abhishek Manu Singhvi.

Congress parliamentarian Renukha Chowdhury blamed the weather. “It is hot outside, so people usually go inside the parliament which has air-conditioning and therefore close their eyes to relax,” she said. “Can anyone sleep in this noise?” she challenged. It’s apparently not impossible – Mr Gandhi was caught in similar circumstances in 2014 amid a discussion on inflation and escalating food prices.

Congress supporter and columnist Tehseen Poonawalla appeared to suggest Mr Gandhi was having a Zen moment. “FYI dear media and BJP – RG is into meditation & one of the best ways to listen to a speaker is to close your eyes, breathe and hear,” he tweeted.

It was definitely a nap, said Mayawati, the Uttar Pradesh powerhouse and Dalit leader, claiming that Mr Gandhi’s dozing off is totemic of his party’s disinterest in fighting for the protection of lower castes. The Congress failed this week to raise the atrocities in Gujarat despite being the main Opposition party in the state and at the Centre, she said. It was only after she highlighted the issue in parliament that the Congress was roused into action, she professed.

Mr Gandhi’s apparent zoning out of this morning’s debate is particularly baffling since he is scheduled to travel tomorrow to Una, the epicentre of the Dalit protests in Gujarat.

Violence has broken out in the region of Saurashtra since a video went viral showing four young Dalit men being thrashed last week in Una by cow protection vigilantes. The victims said they were taking a cow who had died of natural causes to be skinned; the assaulters accused them of cow slaughter.