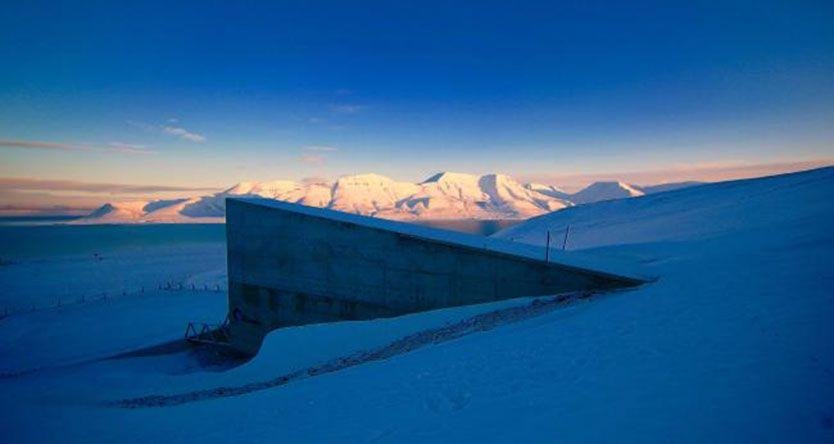 CLIMATE change could threaten the world’s supply of seeds as soaring temperatures caused water to leak into its entrance.

NORWAY this weekend said it would boost protection of a seed storage vault designed to protect the world’s crops from disaster, after soaring temperatures caused water to leak into its entrance.

Situated deep inside a mountain on a remote Arctic island in a Norwegian archipelago, the Svalbard Global Seed Vault, dubbed the “doomsday” vault, is the largest of its kind and can store up to 2.5 billion seeds.

Freezing temperatures inside the vault keep the seeds, sealed in packages and stored on shelves, usable for a long period of time. Permafrost and thick rock should guarantee the seeds are frozen and secured for centuries.

But in October 2016, the warmest year on record, melting permafrost caused water to leak about 15 metres (49 feet) into the entrance of a 100-metre tunnel inside the vault.

No damage was caused to the seeds and they remain safe inside the vault at the required storage temperature of -18 degrees Celsius.

But the vault’s managers are now constructing a waterproof wall inside for additional protection, a Norwegian government spokeswoman told AFP, adding all heat sources would also be removed from inside the vault. “It’s not good to have unnecessary heat inside” if water is coming in and permafrost is melting, Hege Njaa Aschim said.

“We have to listen to climate experts (and) we are prepared to do anything to protect the seed vault,” she added.

The vault currently stores more than 880,000 seed samples from nearly every country in the world, including food staples such as maize, rice, wheat, cowpea and sorghum from Africa and Asia.

“The water that leaked in had turned into ice … we had it removed,” Aschim said. Norwegian authorities are “taking this very seriously” and “following it continuously,” she added.

There are 1,700 gene banks around the world that safeguard collections of food crops and many of these are exposed to natural disasters and wars, according to the independent Global Crop Diversity Trust.

The Svalbard vault was opened in 2008 with the aim to provide a “fail-safe seed storage facility, built to stand the test of time and the challenge of natural or man-made disasters,” the organisation says on its website.

Each country that deposits the seeds into the vault have control and access to their own material.