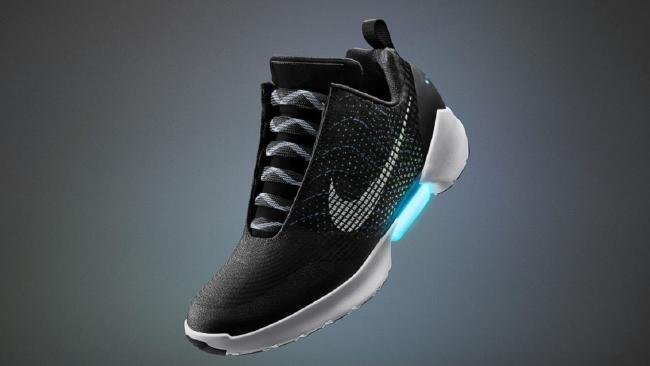 HOLD on to your hoverboards.

Your dreams of channelling Marty McFly from Back to the Future II got closer to reality today, with the announcement that Nike will be selling ‘power-lacing’ shoes.

The world’s largest sportswear brand unveiled the sneaker — named the HyperAdapt 1.0 — along with a host of other innovations today at a media event in New York.

“When you step in, your heel will hit a sensor and the system will automatically tighten,” explains Tiffany Beers, Nikes’s Senior Innovator, and the project’s technical lead.

“Then there are two buttons on the side to tighten and loosen. You can adjust it until it’s perfect.”

Nike says that in the future, it won’t be manual. The sensor could sense when the user needs to have the shoe tighter or looser.

So, other than wanting to imitate a character from a cult movie from the late ‘80s, why on earth do we need a self-lacing sneaker?

Undue pressure caused by tight tying and slippage resulting from loose laces are now relics of the past, according to Nike’s statement. Precise, consistent, personalised lockdown can now be manually adjusted on the fly.

“That’s an important step, because feet undergo an incredible amount of stress during competition,” he says.

Last year Nike gave Michael J. Fox a pair of Nike Mag self-lacing shoes on October 21 (the date when the actor’s character in Back to the Future: Part II travelled from 30 years from the past). Hatfield wrote to Fox at the time that Nike was creating “more pairs for support in aid of the Michael J. Fox Foundation in 2016.”

Other innovations Nike highlighted at the event in New York today include “anti-clog traction,” which uses technology that prevents mud from sticking to the soles of soccer cleats.

They also unveiled a new Nike Plus app, an all-access pass for athletes. The app, available in June, connects to its suite of apps that include running and training aids and provides access to Nike experts.

(In a sneaky/clever move, the Nike HyperAdapt 1.0 sneaker will be available only to members of the Nike+ app).

The shoe will be available in three colours, and the price has not yet been revealed.

Nike’s Australian PR confirms that they are slated for an October release, but cannot confirm whether they will come to Australia.