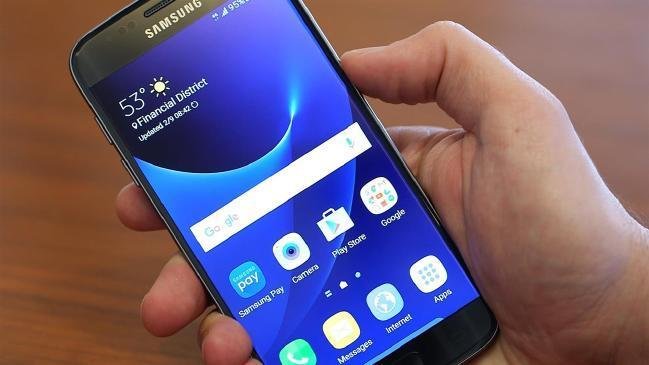 THE world’s biggest mobile phone company will resurrect two popular features it stripped from its smartphones just one year ago in an attempt win back fans, and will launch more virtual reality technology to win over Apple iPhone diehards, it revealed in Barcelona this morning.

The South Korean giant will also launch a virtual reality camera for use with the smartphones that can capture 360-degree video or photos to be viewed in VR headsets, on YouTube or Facebook.

The company has yet to reveal the VR camera’s price, but both new phones will be available for pre-order in Australia this Friday for $1149 and $1249 respectively.

Samsung Australia mobile vice-president Prasad Gokhale said the company regretted removing water resistance and memory card slots from its Galaxy S6 smartphones last year and only did so due to technical limitations in upgrading their bodies from plastic to metal and glass.

“We absolutely were not happy with letting go of those two features,” Mr Gokhale said.

“At that time, with technology limitations, we had to forego the IP67 (water resistance) and the memory card insert. Over the last year we have figured out a way, a very innovative way, to bring in IP68 and also bring in the extra memory card slot.”

The Samsung Galaxy S7 and Galaxy S7 Edge can be completely submerged in water for up to 30 minutes at a time and, unlike their water-resistant predecessor, the Galaxy S5, they do not require users to cover their charging ports. They could be, for example, rinsed off after a sweaty day.

Samsung has also added a hybrid Micro SD and SIM card tray to the top of the devices, allowing the phone to stores as much as 200 gigabytes — 72GB more than its current models.

The phones will also introduce new cameras with larger, f1.7 lenses to capture more light and, though their resolution will drop from 16 to 12 megapixels, Samsung will introduce a hybrid autofocus it promises will lock on to images almost instantly.

The “dual pixel sensor,” only seen in dedicated digital cameras to date, is used to deliver superior phase-detection autofocus in addition to contrast autofocus.

While he admitted some phone users might be suspicious of the drop in megapixels, Mr Gokhale said the company could add 30-megapixel cameras to the phones but it would not have as much impact as the redesigned focus system.

“The trick is now how the megapixels are used but how the autofocus happens, how does the light exposure happen. If you look at the GS7, we are delivering world’s first,” he said.

Samsung’s new phones will also feature “always on displays” to show off the time, calendar or notifications while in standby mode, and will offer new gaming modes to save battery or limit notifications during mobile battles, and a copper pipe water cooling system to reduce heat during long sessions.

Physically, the Galaxy S7 and S7 Edge are 1mm larger and slightly heavier than the models before them, though Mr Gokhale said “1mm is very little to give up for waterproofing and a bigger battery”.

The phones’ batteries, at 3000mAh and 3600mAh respectively, are significantly larger than their predecessors, and 1.7x times bigger than the equivalent Apple iPhone.

Samsung has not reintroduced the removable battery of the Galaxy S5 with these phones, however.

The company, which is rumoured to be delivering its new phones with Gear VR headsets, will also launch its first 360-degree camera for virtual reality content.

The Gear 360 is a golf ball-shaped device with two 15-megapixel cameras on either side that shoot 180-degree views of a scene. The camera can sit on a small, supplied tripod.

After capturing a photo or video with the Gear 360, users can connect it to one of the new phones and “stitch” the footage together to create images that cover its entire surroundings. The results can be viewed on Facebook or YouTube, or inside Samsung’s Gear VR headset, where users can turn their heads left or right to peruse the room.

Mr Gokhale said the camera would “democratise” the creation of virtual reality videos, and was part of an ecosystem designed to make Apple iPhone fans reconsider their loyalty.

“There would be a lot of people who would be outside of the Samsung world and perhaps in other ecosystems. We are now in a position where we will ask people to reconsider, reappraise their position not just from a device perspective but all the other technology.”

New research from Gartner showed Samsung held a 22 per cent share of the smartphone market in 2015, down 2.2 per cent, compared to Apple’s 15 per cent.

“For Samsung to stop falling sales of premium smartphones, it needs to introduce new flagship smartphones that can compete with iPhones and stop the churn to iOS devices,” he said.

The company will also face greater competition at Mobile World Congress this week, with new mobile products expected from Sony, LG, and Huawei.