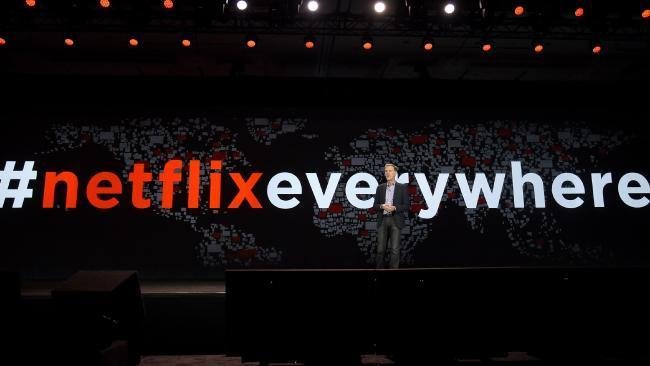 WHEN Netflix announced it was cracking down on those using technical tricks to gain access to another country’s catalogue using their own account, subscribers were furious.

Immediately following the announcement, Aussie subscribers to the streaming service voiced threats to cancel their accounts when the changes come into place.

Many Australian customers said the changes would make their subscriptions worthless, as the local Netflix catalogue has roughly 10 per cent of the US library.

As complex licencing deals restrict what can be shown in different regions, Netflix has come up with a solution to ensure the streaming remains value for money over the coming year.

Speaking at the Television Critics Association’s press tour in Pasadena, Netflix chief content officer Ted Sarandos said the company was planning to create 600 hours of original programming, which is syndicated globally across the service.

“We are running a global network. One that is not easily comparable either in business or cultural terms … We’re not courting advertises, because we’re not targeting a single demographic.”

To coincide with the announcement, Netflix released details for its upcoming original content.

Here is what to expect from the streaming service in 2016:

Created as an excruciatingly honest take on modern relationships, Love follows nice guy Gus and wild child Mickey as they navigate the battlefield of sex and dating.

With Judd Apatow at the helm of the ship, this series is sure to provide plenty of laughter.

The fourth instalment of the acclaimed and award-winning drama, starring Kevin Spacey and Robin Wright will be back and better than ever.

Little is known about the plot of the series, although scandal is sure to ensue as President Underwood shoots for re-election.

As if appearing in BoJack Horseman and Arrested Development was enough, funny man Will Arnett will return to the streaming service in this comedy series.

Set in Venice, California, the eight-episode comedy will follow the life of a self-appointed guru who must one step ahead of his own lies to ensure his all-important image and sobriety stay in place.

The sitcom is set to air twice a year with 10 episodes released at a time and will be shot in front of a live audience.

Aimed at tweens and teens, Lost & Found Music Studios is a live action series about the ups and downs of the music industry.

In each episode, talented teenage musicians struggle to hone their craft at a prestigious music studio.

Kimmy decides to reclaim her life and start over in New York City after living in a cult for fifteen years.

After scoring a new job and roommate, she’s ready to take on a world she didn’t even think existed anymore.

This animated TV series for children is a fresh and modern take on the classic King Kong story.

Set in 2050, Kong is the star attraction at San Francisco’s Alcatraz Island, which is now a Natural History and Marine Preserve.

However, a villain releases super-powered dinosaurs; Kong must overcome adversity to save the day.

Robert Taro has been the Mayor of Marseille for the last twenty years and as the municipal elections approach, he attempts to push through the vote for the construction of a casino in the historic centre of the Marina.

However, when his successor starts to impede the Mayor’s plans, a power struggle with no holds barred erupts.

Grace and Frankie — Premieres globally May 6, 2016

Jane Fonda and Lily Tomlin star as Grace and Frankie, two women whose lives are suddenly turned upside down when their husbands reveal they are gay and want to peruse a life together.

In the wake of the announcement, both parties form an unlikely bond to face an uncertain future together and discover a new definition of “family”.

The show offers viewers the chance to interact and teach the baby animals new words, while also learning the words themselves.

The outrageous, award-winning and critically-acclaimed will return with its fourth instalment.

Not much has been detailed about the plot of the new season, but if its predecessors are anything to go by, the ladies of Litchfield can expect can expect some drama.

The new drama series is a love letter to the ‘80s classics consisting of eight, one-hour long episodes.

The show tells the story of friends, family and local police as they search for answers following the disappearance of young boy.

However, what they soon discover is an extraordinary mystery involving top secret experiments, terrifying supernatural forces and one very strange little girl.

Following the story of a crew of South Bronx teenagers, The Get Down is a mythical saga exploring the birth of hip-hop, punk and disco in New York City.

It was the surprise hit in Marvel’s Netflix foray, with both critics and fans loving the first season of Jessica Jones.

Due to its success, the show has been renewed for a second 13 episode season, but a date has not yet been announced.