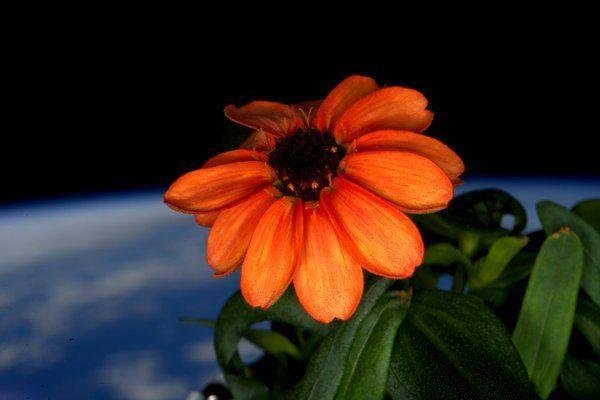 THE International Space Station’s zero-gravity vegetable garden has witnessed a tiny miracle after NASA grew the first flower in space.

US astronaut Scott Kelly tweeted a photograph of the orange zinnia, which has flowered on the ISS.

The flower was grown by NASA to “help scientists understand how plants flower and grow in microgravity”, according to their blog.

The success of the flower’s growth suggests scientists have the potential to grow more plants in space.

It could also mean there may be a potential for a human colony on Mars one day, and brings NASA closer to a manned mission to the Red planet one day.

Until now astronauts have only been able to grow romaine lettuce and rocket.

Kelly posted the images on his Twitter account. Using the hashtag #Spaceflower, he wrote: about it being “out in the Sun for the first time”.
“Plants can indeed enhance long duration missions in isolated, confined and extreme environments — environments that are artificial and deprived of nature,” NASA scientist Alexandra Whitmire said.

Ms Whitmires, deputy element scientist for the Behavioral Health and Performance (BHP) element in the NASA Human Research Program (HRP), also said: “While not all crew members may enjoy taking care of plants, for many, having this option is beneficial.”

“In future missions, the importance of plants will likely increase given the crews’ limited connection to Earth.

“Studies from other isolated and confined environments, such as Antarctic stations, demonstrate the importance of plants in confinement, and how much more salient fresh food becomes psychologically, when there is little stimuli around.”

“While the plants haven’t grown perfectly,” said Dr. Gioia Massa, NASA science team lead for Veggie, “I think we have gained a lot from this, and we are learning both more about plants and fluids and also how better to operate between ground and station. Regardless of final flowering outcome we will have gained a lot.”

The Veggie plant growth facility on the ISS was installed on the orbiting laboratory in early May of 2014, and the first crop — ‘Outredgrous’ red romaine lettuce — was activated for growth.

The second crop of the same lettuce was activated in early July by NASA astronaut Scott Kelly, and adjustments to watering and collecting imagery of the plants were made.

The next crop was a batch of zinnia flowers, which were chosen because they can help scientists understand how plants flower and grow in microgravity.

“It is more sensitive to environmental parameters and light characteristics. It has a longer growth duration between 60 and 80 days. Thus, it is a more difficult plant to grow, and allowing it to flower, along with the longer growth duration, makes it a good precursor to a tomato plant,” he said.