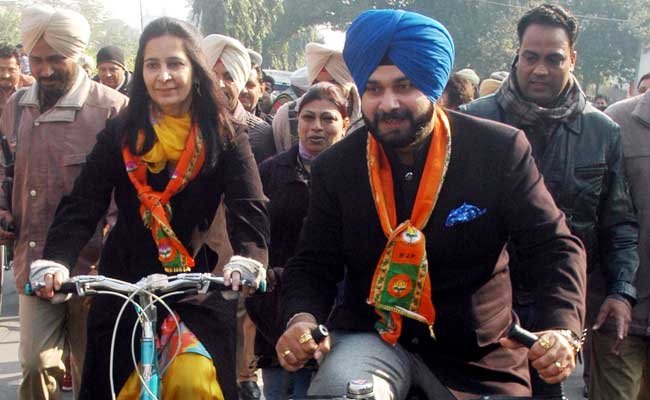 A day after Navjot Singh Sidhu quit the Rajya Sabha, the cricketer-turned-politician was not available for comment. The man famous for ceaseless quips and cutting riposte is on a maun vrat, or temporary period of silence, explained his wife, Navjot Kaur, a Punjab law-maker.

She was unambiguous about what comes next – she remains with the BJP, but Mr Sidhu’s resignation from the Rajya Sabha should be seen as his exit from the party he joined 12 years ago. “He wants to serve Punjab,” she said.

Mr Sidhu, 52, is expected to join the Aam Aadmi Party or AAP at a time when its popularity is surging in Punjab, where it collected four seats in the last general election in a surprise performance. After an enthusiastic “salute” given on Twitter yesterday to Mr Sidhu for giving up his Rajya Sabha seat, AAP chief Arvind Kejriwal was more cautious today, stating, “He is a nice man…I definitely think the party should talk to him.”

In his letter of resignation from the Rajya Sabha, Mr Sidhu wrote, “In the war of right or wrong, you can’t afford to be neutral.”

Three months ago, he was nominated to the Upper House by the BJP in a move to propitiate him ahead of next year’s election in Punjab. Mr Sidhu, widely popular as a motormouth in both cricket commentary and politics, has been upset with the BJP since 2014, when his parliamentary constituency of Amritsar was assigned to Finance Minister Arun Jaitley, who lost the election.

The Sidhus have since shared a fractious relationship with the BJP-Akali government in Punjab.

In April, just days before Mr Sidhu was given the Rajya Sabha seat, his wife posted on Facebook that she was done with the BJP, then retracted her statement.