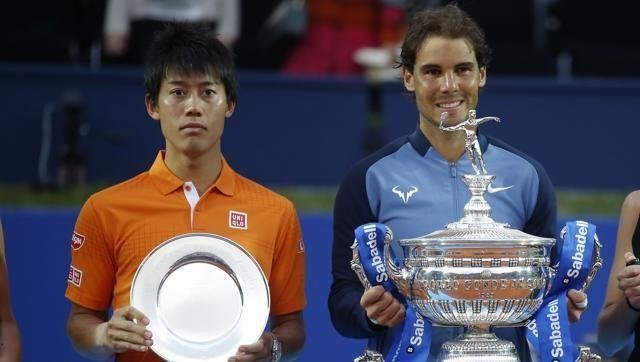 Fresh from winning the Monte Carlo Masters last week, Nadal has now won his opening 10 matches of the European clay-court season ahead of his quest to land a record 10th French Open in June.

Nishikori was left to rue a series of missed break-point opportunities as the Japanese’s 14-match winning streak in Barcelona came to an end.

“I think I served well which was very important. The fact I had a good percentage of first serves allowed me to play better,” said Nadal.

“In the second set I let a lot of opportunities go, but I am very happy to have resisted mentally and happy to win.”

Nishikori had made the most of shock Nadal defeats to claim the title in the past two years, but despite some stiff resistance in just over two hours on court, he slipped to a ninth defeat in 10 matches against the 14-time Grand Slam champion.

“It’s been a great three years, even though I lost today,” said Nishikori.

“I feel very comfortable here, every year I feel very excited, so I hope I can come back next year.”

Neither of the top two seeds had even dropped a set on their route to the final.

Nishikori started brightly, but produced an error-strewn game to hand Nadal the early break for 3-1 in the first set.

The World number six battled back with a number of searing forehands to level at 3-3, but Nadal crucially dug himself out of a huge hole at 0-40 to move ahead 4-3 in his next service game.

And another wayward game from Nishikori handed Nadal the break he needed to seal the set 6-4.

Nishikori did manage to break at the first opportunity in the second set, but this time Nadal responded with his best tennis of the match to surge to within two games of victory at 4-1.

Yet, a topsy-turvy final had another twist as an inspired Nishikori’s range of depth and well-timed drop shots saw him break back to level at 4-4.

Nadal missed out on his first match point at 5-4, but didn’t have to wait long as Nishikori offered up two more in his next service game and sealed his own fate when a forehand found the net.