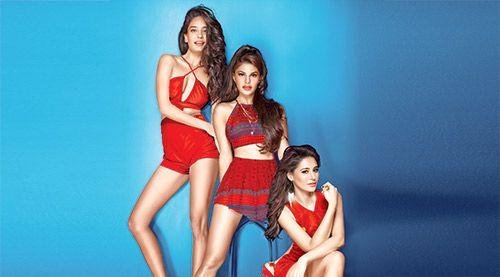 Coming up with yet another fun roller coaster ride is Sajid Nadiadwala with the third installment of Housefull 3. The producer in fact has gone a step ahead for this triquel and has even bought the rights of a 80s American song for the glam divas of the film.

It is a known fact that Housefull 3 stars three leading ladies namely Jacqueline Fernandez, Lisa Haydon and Nargis Fakhri. For the song featuring the divas, producer Sajid Nadiadwala has bought the rights to a Cyndi Lauper cult song ‘Girls Just Want To Have Fun‘ which featured at No. 22 in Rolling Stone’s list of 100 greatest pop songs. The said song is not just a part of the film, but it also opens the soon-to-release trailer.

Penned and recorded first by American musician Robert Hazard in 1979, it is the Lauper single which released four years later. It has stayed with Sajid for almost a quarter of a century and talking about it, Sajid added, “I heard it for the first time when I was in college and it stayed in my mind. ‘Saturday Night Fever‘ and ‘Girls Just Want To Have Fun‘ are tracks we grew up dancing to and the moment I got a chance to use it in a film, andar ka armaan jaag utha. Fortunately, even my directors, Sajid-Farhad, agreed with my choice,” laughs the filmmaker.

Sajid admits that getting permission was a long and tedious process and required lots of patience. “Even after we had got clearance, there was a lot of paperwork to be done. I was on the edge because we had an expensive night shoot planned on the London Bridge with the three girls – Jacqueline Fernandez, Nargis Fakhri, Lisa Haydon – and did not want to start filming till we got the go-ahead, just in case. We didn’t even know that we needed fresh permission and had to pay extra to use the song separately in the trailer,” he recalls.

There was jubilation when it finally came through and even Sajid who joined the unit two days later, was grooving to the beat as his trio of beauties pranced on the iconic bridge and sailed down the Thames. “The girls are sisters and important to the narrative. There’s the same element of fun that you see in the Cyndi Lauper video but we haven’t borrowed a single shot. Choreographer Ahmed Khan has his own take on the chart topper,” he reveals. “Whether it was Deepika Padukone or Asin in the past or these three, the Housefull heroines have always been hip and happening. This time the sisters are based in the UK so we took actresses who have grown up abroad so they look, talk and behave right,” he reasons. Sajid asserts that Part 3 is three times funnier than the other two. In fact, everything has been raised to the power of three, he promises.

There’s talk that Sajid Khan will be back to helm Part 4? “Let’s keep this talk confined to three, shall we?” he retorts. “There’s time for four yet!”

Besides the girls, Housefull 3 stars Akshay Kumar, Abhishek Bachchan and Riteish Deshmukh in lead roles and it is slated to release on June 3.