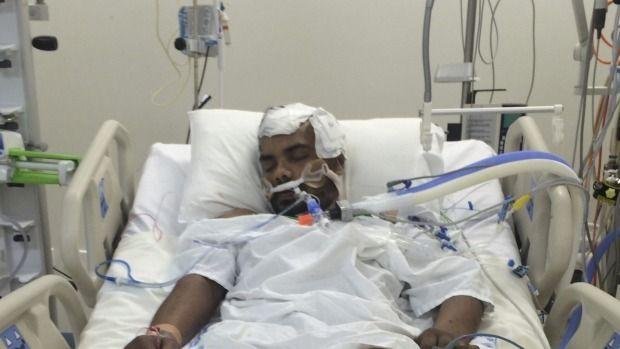 Police are hoping that grainy CCTV footage of a man in red shorts may help to solve a mystery assault that has left a man in a coma for three weeks.
Vineshwar Pal, 29, has not regained consciousness since the suspected fight in early November and remains in a coma at Westmead Hospital.
Police were called to Brown Street, Parramatta about 5am on Wednesday, November 4, following reports of a fight.

They spoke to people in the vicinity but couldn’t find anyone with injuries.

However, three hours later they were called back to the area after Mr Pal was found badly injured in a front yard nearby.
“Officers believe Mr Pal was assaulted by a group of people and are looking to identify all involved in the incident,” a police statement said.

Photos of Mr Pal from hospital show him on breathing apparatus with a large gash on his forehead.
Strike Force Ramox investigators released CCTV footage on Thursday of a man who may be able to assist with their inquiries into the serious assault.
The footage, from about 4pm on November 4, shows a man standing on the side of the road, wearing red shorts and white shoes.
Anyone with information about the identity of the man or other information that may assist with the investigation is urged to come forward.