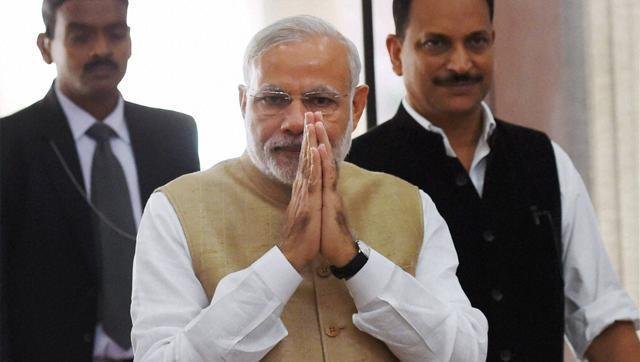 Prime Minister Narendra Modi will intervene in a rare parliamentary debate to commemorate the Constitution, an occasion he may use to speak on intolerance in India with the Opposition waiting to target him on the issue inside the House.

To placate opposition parties, parliamentary affairs minister Venkaiah Naidu announced at an all-party meeting on Wednesday that the government was ready for a separate discussion in Parliament on the raging issue, accepting their clamorous demand.

The government was also willing to accommodate the Opposition’s concerns over intolerance in a House resolution on Friday to commemorate the making of the Indian Constitution, reflecting its keenness to reach out to rivals ahead of the crucial winter session.

Modi, who joined the meeting midway, said, “If Venkaiahji is saying everything is alright then something good has happened today.”

Several opposition parties announced they would press for debates on the burning issue with the Left and JD(U) even demanding a Sense of the House resolution—to reflect wider support across the political spectrum against mounting intolerance in the country.

“We are going to raise the issue of intolerance. What is happening in the country is disturbing and the Prime Minister is silent,” Congress vice-president Rahul Gandhi said in Bengaluru.

Indicating that the ruling party would not be on the defensive, Naidu said at the meeting, “The government does not share the perception that intolerance is on the rise. Some stray incidents that happened are in the domain of responsibility of state governments. We are wise enough to appreciate that development is possible only in an atmosphere of peace and harmony.”

The winter session, from November 26 to December 23, is expected to see fireworks as well as intense back-channel negotiations between the Opposition and the government that has limited time for its heavy legislative agenda comprising 38 bills to be passed.

But opposition parties are adamant on discussing a wide range of subjects like drought, price rise, declining industrial production and exports, Centre-state relations including extending financial support to states and the Supreme Court striking down the National Judicial Appointments Commission Bill.

“People have great expectations and that is why Parliament should function and be productive,” Modi said at the meet.

The government faced a near washout in the previous session as the Congress-led Opposition demanded resignations of senior BJP ministers mired in controversies.

Though the Opposition did not rake up these points in Wednesday’s meeting, sources said tensions between the NDA and rival parties might escalate over other issues.

While Modi and Naidu appealed to all parties to ensure smooth running of the winter session of Parliament, CPI(M) Yechury summed up the Opposition’s mood. “The onus of running Parliament lies squarely on the government. It has to consult all opposition parties on its agenda and also address our concerns,” he said, demanding that a Sense of the House resolution on intolerance must come.

Parliament will reconvene on Thursday weeks after the BJP suffered a bruising defeat in the crucial Bihar assembly elections and also lost a Lok Sabha seat in Madhya Pradesh to the Congress, buoying the principal opposition party which had faced a slew of electoral setbacks since last year’s Lok Sabha polls.

The government is in a minority in the Rajya Sabha and needs the Opposition’s support to pass crucial reform measures. “We need to leave memories of the monsoon session behind and together move forward,” Naidu said at the meeting.