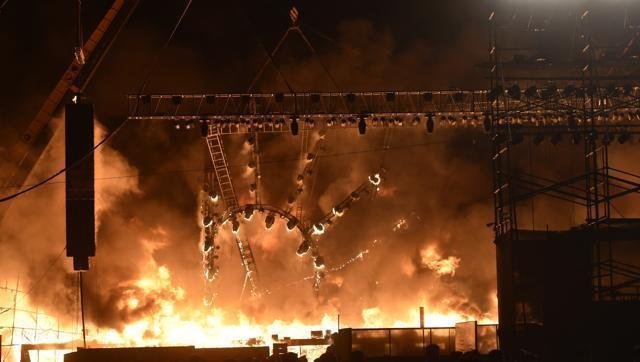 A huge fire broke out on stage during a cultural programme at the Make in India event in Mumbai on Sunday evening.

However, no casualties were reported as the venue, at the Girgaum Chowpatty area, was emptied within minutes.

The fire broke out of sparklers during a Lavani performance on the state at around 8.15pm.

More than 15,000 people were present when the blaze began, police said.

Calling the incident ‘unfortunate’ CM Fadnavis said that the fire had been brought under control and gave information about the relief operations in a series of tweets.

He also said that the venue was evacuated immediately and traffic management allowed early dispersal without any trouble.

Fadnavis said a comprehensive inquiry into the incidence of fire will be conducted to ascertain the reasons.

According to disaster management officials, the fire was a Grade 2 event that calls for eight fire engines.

Officials, however, rushed 14 fire tenders and 10 water tankers to the spot.

“We were shocked and confused when someone shouted ‘fire!’. We found that the fire wasn’t that bad initially,” said Anjana Sukhani, one of the dancers who was on the stage.

On Saturday, Prime Minister Narendra Modi had launched the Make in India week in the city exhorting global business giants to set bases in the country.