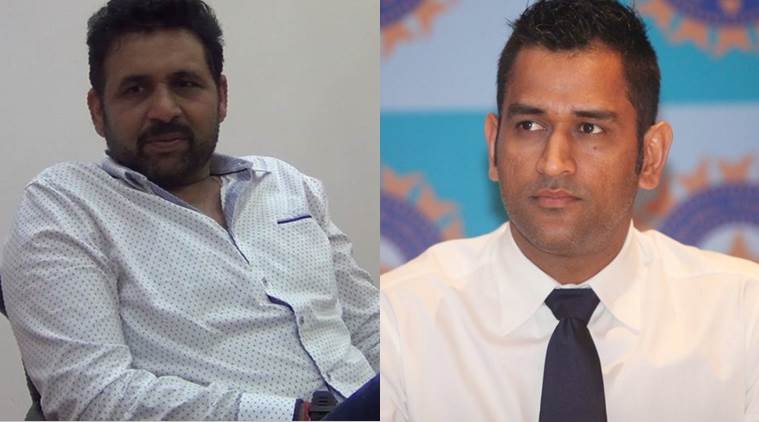 Out of the many, humility and generosity were the major two words Arun Pandey chose to describe his childhood friend and cricketer MS Dhoni. Pandey, who is now a manager and business partner of the Indian skipper is also turning producer with the upcoming biopic on the cricketer’s life, MS Dhoni: The Untold Story. The foundation of their friendship was laid nearly two decades ago when Dhoni was hardly a known face.

When indianexpress.com sat for an exclusive chat with Pandey, he started from his struggling days at the Ranji Trophy. Before entering business back, Pandey too had a thing for cricket. Though he left the game after few attempts, he believes the only takeaway he had from that little phase on the pitch, was meeting Dhoni. And today he probably cannot thank destiny enough for that.

“I consider myself very fortunate to be associated with someone so humble and inspiring. Dhoni inspired me in a lot of ways. Even now when I feel puzzled in life, I often turn to Dhoni for advice. I find peace in his simple answers and solutions. He always encourages me to think about the present first and future later and give my best in whatever I perform”, Pandey said.

In 2015, MS Dhoni was one of the Indians who made it to the Forbes 100 list of the highest paid celebrities. One can presume that it was more than a dream come true for a man hailing from a middle-class family in Ranchi and struggling his way all through the Forbes. Pandey, who has personally been a witness to Dhoni’s journey through thick and thin, finds it awe-inspiring.

“I did not want to be a silent and only witness of this journey anymore. What I really appreciate about him is he still manages to keep his humility despite his popularity. Despite so many changes he is still the humble boy I knew back in 1998. He has not changed at all and I really appreciate that about him. ”

Many times Dhoni has made his country proud. But those who know him closely, say one would never find a tinge of that quality in him.

For someone like Pandey, who has been associated with the celebrity for almost two decades, it was hard for him to classify that one moment he would call ‘best’ in his life, because he feels several things come unexpectedly and before you know it, they acquire a place in your heart.

“There are too many of them. But since you insist… let’s say well it happened back in 2001..or 2002. I guess.. (he said tentatively) I was a resident of Delhi then. Dhoni was very fond of burgers, milkshakes from McDonald’s. We used to live at Lodhi Colony. He used to borrow my bike to visit a McDonald’s near South Extension. While buying his share of the meal, he also bought the similar share for me. I was really touched by this gesture from him. I was touched by these little acts of generosity. These acts of kindness were not his one-time thing, and if I start, the list would never end, it’s these little sweet memories that really touched me”.

Pandey also shared with us, another moment when Dhoni was the only person in the team to own a mobile phone. Puzzled are you? Well, he was referring to the year 2001, when people considered cell phones a luxury. More than Dhoni, it was his teammates who used his phone. But the man never complained. Such silent gestures only went on to signify the humble background he came from. Now that the biopic MS Dhoni: The Untold Story is ready, hHis family in Ranchi is keeping things low, and refraining from speaking much  has not been very expressive about the upcoming film.

“You see he comes from a grounded family. Even now for them, small gestures matter more than big ones,” he said about Dhoni’s family.

Other than Dhoni, cricketer Yuvraj Singh will also be seen in the film. “Yes. Yuvraj Singh is there and I’m not gonna mention anymore,” he laughingly said hinting that the film might have more cricketers whom we have seen sharing the pitch with Dhoni. However, the film will focus more on Dhoni’s journey from a ticket collector to an internationally known cricketer, rather than his relationship with his teammates.

“My intention was to show Dhoni’s journey, his struggle, and I believe Neeraj Pandey did justice to the film. You are bound to be impressed and inspired.”

Pandey further told us how actor Sushant Singh Rajput was chosen for the role based on two grounds. Firstly because he readily agreed to do it. Secondly, he was very convincing in his debut film Kai Po Che. Pandey felt Sushant’s approach towards the film proved that he had a good knowledge about cricket and had an intimacy with the game.

Talking about director Neeraj Pandey, he just couldn’t thank him enough for the care and perfection with which he has handled the project.

“I knew a movie about Dhoni will be a good one. The duo (Neeraj Pandey and Sushant Singh Rajput) made it remarkable. The film will not just show Dhoni as a mere cricketer, it will show the hardship he underwent to get his achievement.”

MS Dhoni: The Untold Story is releasing on September 30.