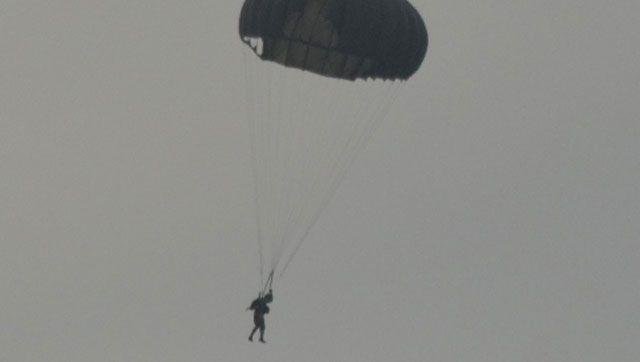 Indian cricket captain Mahendra Singh Dhoni completed his first parachute jump from an India Air Force aircraft on Wednesday as part of his training with the Territorial Army.

Dhoni, who has been undergoing training at the Paratroopers Training School (PTS) since August 6, jumped with a canopy static line parachute from an AN32 aircraft and touched down at the Malpura dropping zone near Agra. He has to undertake five more jumps from 10,000 feet, including one at night, to be a qualified parajumper.

Dhoni, an honorary lieutenant colonel in 106 Parachute Regiment of the Territorial Army (TA, decided to undergo the drill to justify his rank.

Before the jump, the acr cricketer underwent two weeks of classroom lessons followed by basic toughening exercises along with fellow paratrooper trainees.

The classroom lectures were on basic techniques of para-jumping followed by toughening exercises to help prepare the body for the jerks and jolts involved in jumping off a aircraft with a parachute.

Dhoni, who already sports the maroon paratrooper beret which is the sign of a commission in the elite Para Regiment, would earn the right to wear the coveted Para Wings insignia after making the five successful para-jumps.

While the limited overs skipper is the first cricketer in the world to train as a paratrooper, he is not the first or only sportsperson to attain an honorary TA rank — former captain Kapil Dev and shooter Abhinav Bindra too were ‘commissioned’. But Dhoni is definitely the first one to actually work for the ‘wings’ on his olive greens.