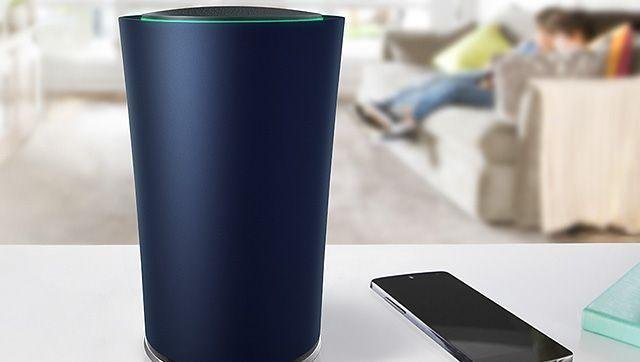 Google has unveiled a new WiFi router that is aimed at increasing the ease and speed at which people’s increasingly indispensable smartphones and tablets connect with its services at home.

The Internet giant has billed OnHub, manufactured in partnership with networking product major TP-LINK, as a “different kind of router for a new way to WiFi.” OnHub is supposed to be easy to set up and manage, have high performance, and be able to tie together smart home accessories.

“Instead of headaches and spotty connections, OnHub gives you Wi-Fi that’s fast, secure, and easy to use,” Google said in a blog post.

OnHub’s key selling point seems to be that it’s easy to set up and painless to troubleshoot. It connects to iOS and Android phones through what appears to be a clean and stylish app that tells owners how many devices are connected to OnHub and what speeds they’re getting.

According to Google, the router’s circular design should allow it to have better penetration throughout a home (OnHub has 13 antennas inside). The router will automatically detect the best channel to broadcast on and includes support for 802.11ac and 5GHz Wi-Fi.

Google has promised to bring new features to the OnHub over time.

Unlike existing home routers, OnHub is expected to handle firmware updates automatically, similar to over-the-air updates on smartphones. The router does not have any other unique software features now, but Google may add other experimental features like integration with smart home devices.

Among the more interesting features that Google mentions in the blog is that OnHub supports Bluetooth LE and Weave – Google’s new smart home language – which could eventually allow the router to serve as a smart home hub.

OnHub is priced at $199 for online pre-orders and will go on sale in stores in the US and Canada from August 31.