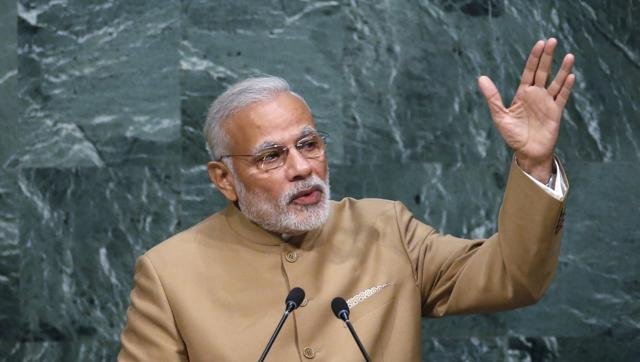 Prime Minister Narendra Modi has acknowledged that the dreaded West Asian terror group Islamic State, which controls large swathes of Iraq and Syria, poses one of the “greatest challenges” facing the international community. Modi emphasised the need to de-link terrorism from religion as a weapon in the fight against terror.

In a meeting with King Abdullah of Jordan on the sidelines of a UN General Assembly session, Modi discussed ways to prevent radicalisation of youth and to counter extremist messaging, external affairs ministry spokesperson Vikas Swarup said after the meeting. Modi and Egypt’s President Abdel Fattah al-Sisi also discussed counter-terrorism at a separate meeting.

“Both leaders acknowledged that ISIS was one of the greatest challenges facing the international community. The Prime Minister said that there is a need to delink terrorism from religion,” Swarup said.

India is facing security threats after recent reports that many of its youngsters were being lured by jihadists using online forums.

Modi said the only way to combat international terrorism and the menace of organisations like IS (also known as ISIS) was to have a global response. Referring to the long pending proposal of a comprehensive convention on international terrorism, he said the time has now come for the international community to speak on one voice on this important issue and adopt this global convention. Modi and King Abdullah also discussed the UN Security Council reform.

“The Prime Minister mentioned that it was inconceivable that a country as large as India representing one sixth of humanity was not in the Security Council,” he said.

The King of Jordan said he has always supported India’s aspirations to be a permanent member of the Security Council and added that Jordan is a very important country in a very important region from India’s point of view.

During the meeting, the Prime Minister commended King Abdullah for the strong leadership that he has shown in the fight against international terrorism.

He also thanked the King for the support that Jordan had provided when Indian citizens were trapped in Iraq and Syria and have to be evacuated. King Abdullah said he valued India as a partner and wanted to increase the economic and security co-operation that Jordan has with India, Swarup added.