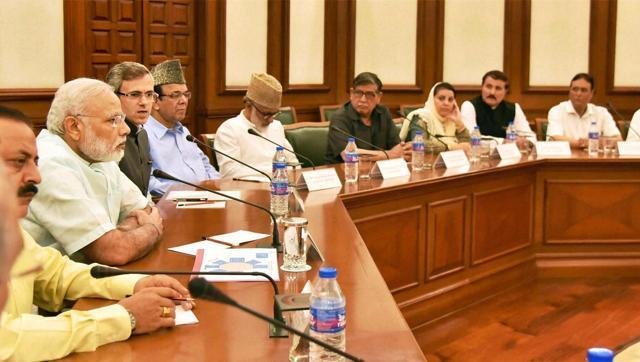 Prime Minister Narendra Modi expressed “deep concern and pain” on Monday over weeks-long deadly violence in Kashmir, saying there was a need for dialogue and a permanent solution to the region’s troubles.

Modi’s comments are seen as conciliatory after he spoke of Balochistan and Pakistan-occupied Kashmir in his Independence Day speech but not the protests in Kashmir. Several of his ministers had also called the protesters aggressors and said there would be no compromise with them.

The prime minister’s latest remarks came at a meeting with opposition leaders from Kashmir, where street protests against last month’s killing of militant commander Burhan Wani by security forces left 67 people dead, mostly in police firing. Parts of the state have been under curfew for 45 days.

“Those who lost their lives during recent disturbances are part of us, our nation. Whether the lives lost are of our youth, security personnel or police, it distresses us,” a government statement quoted Modi as saying at the meeting.

The prime minister “emphasised that there has to be dialogue and we need to find a permanent and lasting solution to the problem within the framework of the Constitution,” it said.

Modi’s Independence Day reference to Balochistan and PoK, the first by an Indian prime minister, was seen by many as inopportune and diluting India’s moral ground on Kashmir. His Monday’s remarks appear more in line with the moderate vision of former Prime Minister Atal Bihari Vajpayee whose government was the first to hold talks with Kashmiri separatists.

Kashmiri leaders have voiced concern over the use of what they say is disproportionate force against the local people and accused the state’s ruling BJP-PDP alliance of trying to tackle the violence using administrative measures such as indefinite curfew rather than seeking a political solution.

The Kashmiri delegation, led by former chief minister Omar Abdullah, told Modi it was “dismayed” at the lack of a “political approach” in dealing with the ongoing unrest, sources said.

The eight-member delegation urged him to start a dialogue with all stakeholders, saying an administrative response rather than a political solution had “created an unprecedented sense of disaffection and disenchantment” in Kashmir, especially among the youth.

A delegation member, who refused to be identified, said a suggestion was made that the prime minister “directly” address the people of Kashmir in his monthly radio broadcast “Mann ki Baat”.

“The PM acknowledged that he should have reached out to the people earlier. His remark that there is a need to look beyond development aspect to address the problem is significant,” said Congress leader GN Monga, who was also part of the delegation. “Let’s hope for the best.”

Another member said Modi “looked visibly concerned and serious to resolve the problem”.

Abdullah said the prime minister agreed with the delegation that development alone was not the answer to the crisis.

The Kashmiri leaders met Congress vice-president Rahul Gandhi on Sunday. The party leaders from the state urged him to visit the Valley and assess the situation “first hand”.

“He might visit Kashmir soon,” said a state leader.

“There have been encounters before, people have been killed before. But why so much madness this time around?” she told a rally, referring to the gunning down of Wani.

“Whenever they see that some constructive work is being done, some progress is being made, they try to hinder it,” she said.

- Advertisement -
Share
Facebook
Twitter
Pinterest
WhatsApp
Previous articleVisiting hours at Taj Mahal to be restricted, batches likely
Next articleBureau of Statistics says there is a silver lining to be found in census shambles
- Advertisement -