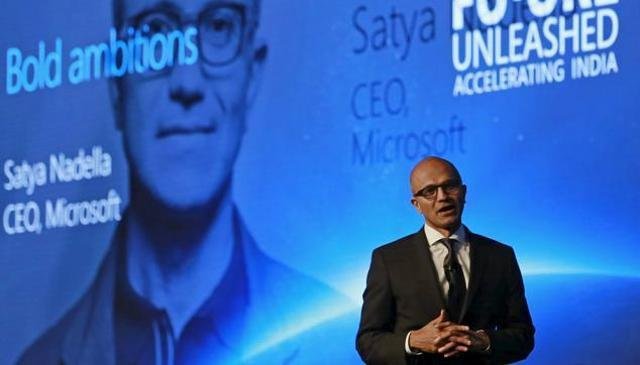 From partnerships with e-commerce firms, to a new programme for startups, to associating with the government’s smart cities project, India-born Microsoft CEO Satya Nadella chose the company’s high-profile conference on Wednesday to unveil his India plans.

The technology giant is also working on ways to rid users of their password worries. “We are working on a world where passwords are not going to be the ones that you know can get hacked. They will have other biometrics that really help us secure our interfaces,” Nadella said.

He also said that flagship devices — Microsoft Lumia 950 and 950 XL, and the new Microsoft Surface Pro 4 — will be available in December and January, respectively.

Nadella also spoke on plans to empower Indian cities through local startups. “These startups can apply for access up to $120,000 (about Rs 80 lakh) worth of Azure computing (Microsoft’s cloud services) for smart cities solutions. Cities can also apply for access Azure through a new portal, which connects startups with cities. This initiative will benefit 50 smart cities in the next year through 50 startups,” he added.

Seen as one of Prime Minister Narendra Modi’s pet schemes, smart cities have been adopted by various states, with Andhra Pradesh using the concept to build its capital, Amravati.

Microsoft said along with Justdial it will explore the use of Bing and cloud-based analytics to enhance customer experience. Paytm and Microsoft are currently working on three core areas of partnership, where the companies will integrate the Paytm app and wallet into Cortana (Microsoft’s personal assistant app) to enable consumers to pay for utility bills and carry out mobile transactions.