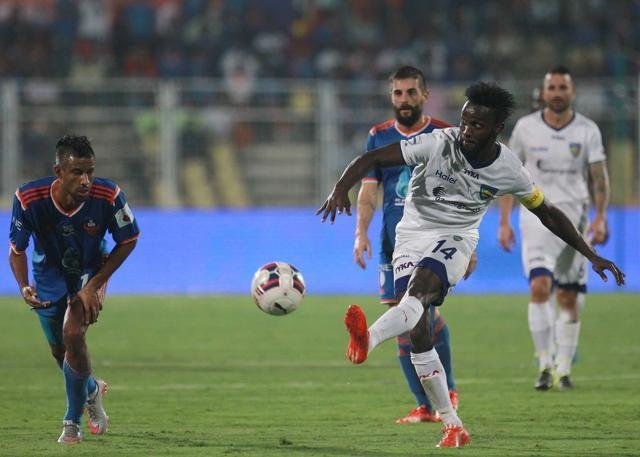 Stiven Mendoza salvaged Sunday night from being a nightmare with an injury-time goal that gave Chennaiyin FC the ISL2 title in a match that saw two penalties, two goals in second-half stoppage time and one in the 87th minute. The Bollywood stars present in the owners’ boxes of FC Goa and Chennaiyin would have given an arm and a leg for a script like this.

When Joffre Gonzalez beat Edel Bete with a free-kick, FC Goa thought they had sealed it. At least, the sold-out stadium thought so. Gonzalez, who was part of the Atletico de Kolkata side that won last year, took off his shirt and celebrated. Then everything Laxmikant Kattimani had built, based on the confidence Zico reposed on him, in this competition collapsed when he missed a collection Mehrajuddin Wadoo certainly didn’t think would go in. At 2-2 with the clock already a minute into added time, you needn’t be a betting man to wager that extra-time was looming.

But just as last year, when Mohammed Rafique came from nowhere to score a fairytale winner, Mendoza made a moment his own after Jayesh Rane found him. The Colombian nut-megged Gregory Arnolin and toe-poked the winner. He too took off his shirt and this time there was no twist to the tale.

The way FC Goa took the game to Chennaiyin FC after being rolled over in the first half showed how astutely Zico reads the game.

It also showed his tremendous confidence in Indian players by taking out injured Brazilian Leo Moura, their deep-lying playmaker, and sending out Thongkoisep Haokip at the start of the second half. It meant FC Goa had six Indians on the pitch, one more than mandated. FC Goa had already been forced into an eighth-minute substitution after Dudu Omagbemi was hurt in a collision with Mailson Alves.

FC Goa pushed up as a team and attacked the Chennaiyin FC wingbacks. Playing medio Pronay Haldar as the third central defender was always fraught with risk because it meant Mendoza could run into spaces and it was Haldar who conceded the penalty just when FC Goa had taken control. Kattimani saved Bruno Pelissari’s penalty but the Italian knocked home the rebound.

The response from Goa was superb. Romeo Fernandes, Mandar Rao Desai and Rafael Coelho used the width of the pitch and when Fernandes found Haokip with Wadoo ball-watching, FC Goa were back. Next minute, in the 59th, they were gobsmacked when Mendoza forced Kattimani to scythe the Colombian. And then Kattimani denied Mendoza, who scored 13 goals to win the Golden Ball. Gonzalez couldn’t make it two in a row in ISL finals but Edel Bete did. He denied Haokip from scoring what could have been a crucial goal when the scores were 1-1. Last year, he had given Atletico de Kolkata the title with a string of brilliant saves in the final.

This time, he kept Chennaiyin FC in the competition when the opposition threw the kitchen sink and more. By never losing against FC Goa in six games, Bete ensured that an incredible comeback was completed for a team that was at the bottom of the standings weeks ago.