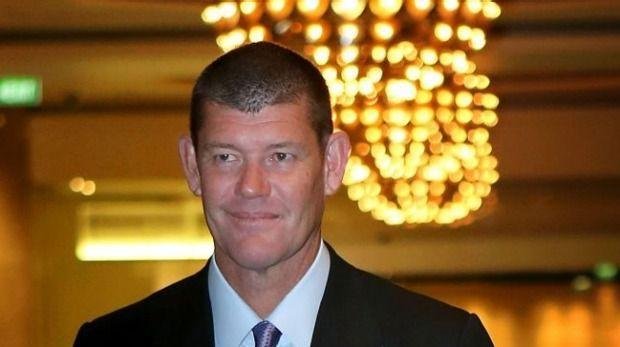 James Packer has resigned as a director of casino operator Crown Resorts, as speculation intensifies that he may look to take the company private. The news helped push the company’s shares 5.7 per cent higher before settling to a 3.5 per cent gain to $12.01 in early afternoon trading.

Mr Packer, who owns 53 per cent of Crown, said on Monday that he will step down from the board to focus on his new executive role in the business.

He will remain co-chairman of Macau-focused group Melco Crown Entertainment and co-chair of Alon, the holding company for Crown’s push in Las Vegas. Mr Packer stepped down as Crown chair in August.

Shortly after the market opened, Crown Resort shares traded 5.6 per cent firmer at $12.26.
“I have taken this decision over several months following the smooth transition by Rob Rankin into the company chairman’s role and the stable and cohesive functioning of the board and the senior management team during the period that I have transitioned overseas.

“Now is the right time for me to focus my endeavours on my new role with Crown, as I outlined to shareholders when I stepped aside as chairman in August. I intend to devote my energies to a number of key development projects in Sydney, Melbourne and Las Vegas, as well as Crown’s online platforms.”

Mr Packer has spent more time outside of Australia in recent years. When he is not travelling, he divides his time between Los Angeles, where his children live, and Israel which has been the focus of new investment opportunities in cyber terrorism and other tech start-ups.

“Of course, I remain incredibly passionate about Crown and its world-class integrated resort business. Crown is my biggest professional priority and represents the vast majority of my net wealth.”

Mr Packer’s share wealth was valued at nearly $5 billion earlier this year by the BRW Rich List. Before the revelation that Mr Packer is looking to privatise Crown, the company’s shares had endured an ordinary 2015 with their value crashing by nearly 20 per cent.

However, a bounce of nearly 15 per cent in the last week has restored the paper fortunes of the casino magnate although at just over $12 a share they remain a long way from the all time record of $18 a share in January 2014.

Mr Rankin, who is also chief executive of Mr Packer’s private investment vehicle Consolidated Press Holdings, left the door open to the billionaire returning to the Crown board in the future given his controlling 53 per cent stake.

Part of the trigger for the shake up of Mr Packer’s involvement in Crown is the $1 billion-plus settlement he inked with his older sister Gretel in October.

The deal is understood to be structured so that Ms Packer, 49, will receive payments from her brother, having already received a large advance upfront payment, as well as retaining a small residual stake in CPH that will be protected from loss.

“At Consolidated Press Holdings too, we recently concluded a major transaction in my family’s business and this also has assisted the timing of my decision,” said Mr Packer on Monday. “Gretel and I have never been closer.”

Mr Packer on Monday Packer vented frustrations over delays to his $2 billion casino in Sydney’s Barangaroo and conceded it will struggle to meet its original 2020 deadline given it has yet to receive vital planning approvals.

In an interview to mark the 10th anniversary of the death of his father, Kerry Packer, on Boxing Day 2005, the gaming mogul said he was impatient to start building the casino and hotel development on prime waterfront land partly as a tribute to his father’s legacy.